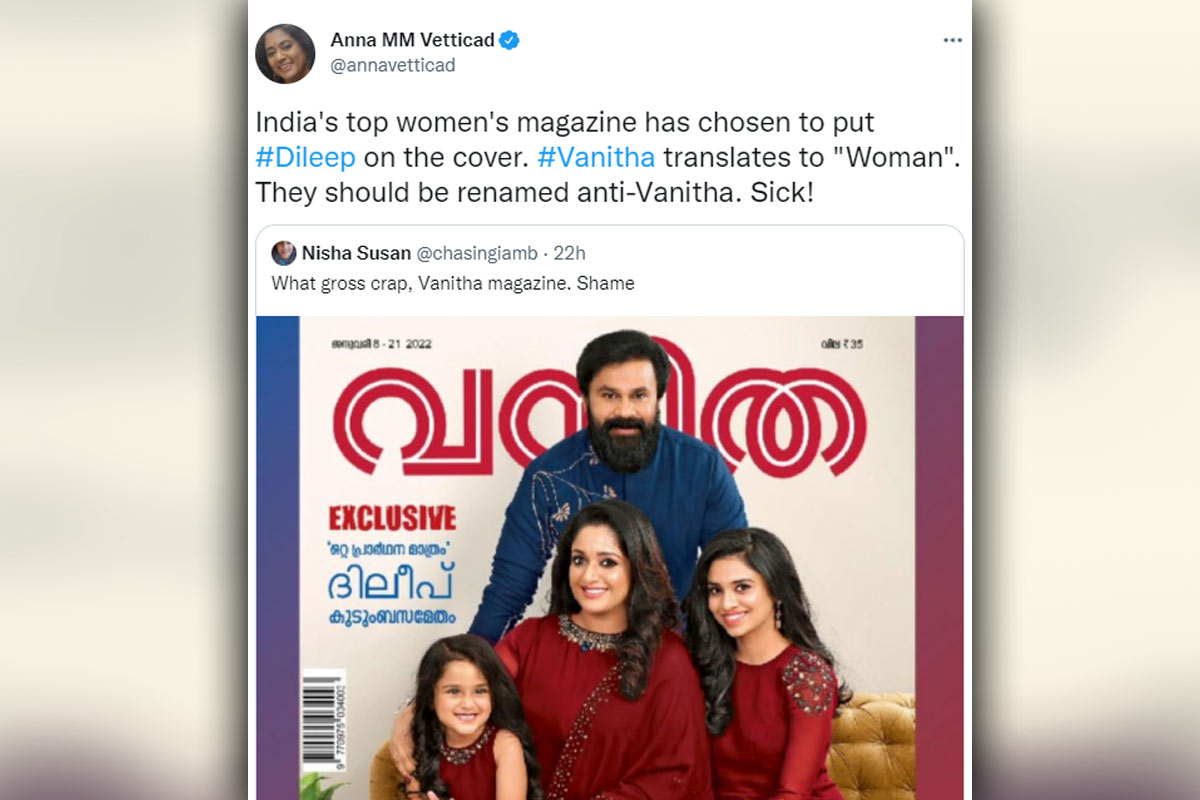 The January 2022 issue comes days after Dileep’s former friend director Balachandra Kumar made serious allegations against him in the actor assault case.

The latest issue of Vanitha magazine, published by the Malayala Manorama group, sparked massive outrage on social media. On the cover of Malayalam magazine, published by the group Manorama, is actor Dileep accompanied by his two daughters and his wife Kavya Madhavan. He is carefully positioned as a family man, dominating the two daughters and Kavya. The January 2022 issue comes days after Dileep’s “old friend” director Balachandra Kumar made serious allegations against him in the actor assault case.

Dileep is accused of being the mastermind of the crime which took place in February 2017. A prominent actress in the Malayalam film industry was kidnapped and sexually assaulted in a moving vehicle by a group of men. The trial in the case was drawing to a close when Balachandra Kumar’s allegations surfaced, prompting police to investigate further. Vanitha’s decision to carry Dileep’s photograph on the cover page under such circumstances is seen by many as an attempt to whitewash her image.

The cover article, written by Vijeesh Gopinath, paints a sympathetic picture of Dileep, describing the last five years of his life as a “storm-rocked ship” and adds that he began speaking to the interviewer with ” the face of a captain who will protect those who accompany him during any storm “. The interview describes his childhood poverty and family life, then projecting him as the victim of a conspiracy. The question asked by interviewer Vijeesh is: â€œEvery time your new movie comes out, new controversies arise. To that, Dileep said, “It happened earlier too, that attempt to portray me as a villain when my movie comes out.” He adds that he doesn’t know why “some people have this enmity towards me”.

Claiming that he was predicted to die before his 48th birthday, Dileep treats the interview to turn into a victim, saying, “He’s a type of death too. I’m lucky to have seen a lot. people kill me when I’m alive. The interviewer asks Dileep if he ever wanted to kill himself, to which the accused replied: “No, I only pray that I stay alive and that I be mentally stable until the truth is proven. about all of his “pain” one day his wife Kavya steps in to say that she told him to write about everything he has been through, mentioning everyone involved.

Numerous people on social media have criticized Vanitha and the Manorama group for their blatant support for the accused, even as new evidence of Dileep’s alleged involvement is investigated. The audio clips shared by Balachandra Kumar were broadcast on several news channels. These clips, if proven to be genuine, suggest that Dileep was in possession of the video of the assault long before he and his legal team viewed it in the magistrate’s chamber at Angamaly courthouse. The mother of Accused No.1 Pulsar Suni also handed over a letter her son allegedly wrote detailing the crime. In the letter allegedly written by Suni, he claimed that he committed the crime at Dileep’s request. He reportedly told his mother that he was writing down the details because he feared for his life.

Commenting that it was “anti-Vanitha” (Vanitha means “woman”) to publish such a cover page at this point, many social media outlets expressed outrage and disappointment with the magazine.

India’s largest women’s magazine has chosen to put #Dilep on the cover. #Vanitha translates to “Woman”. They should be renamed anti-Vanitha. Sick! https://t.co/wNHk77Wp99

#Shame to #VanithaA reputable women’s magazine (with a slogan that loosely translates to “The friend and guide of women”) featuring one of the main defendants in the #actressAssault case on the cover page..n this too when the case was reopened by the police with new evidence against him !! https://t.co/gplMegS708 pic.twitter.com/chNMl07H5E