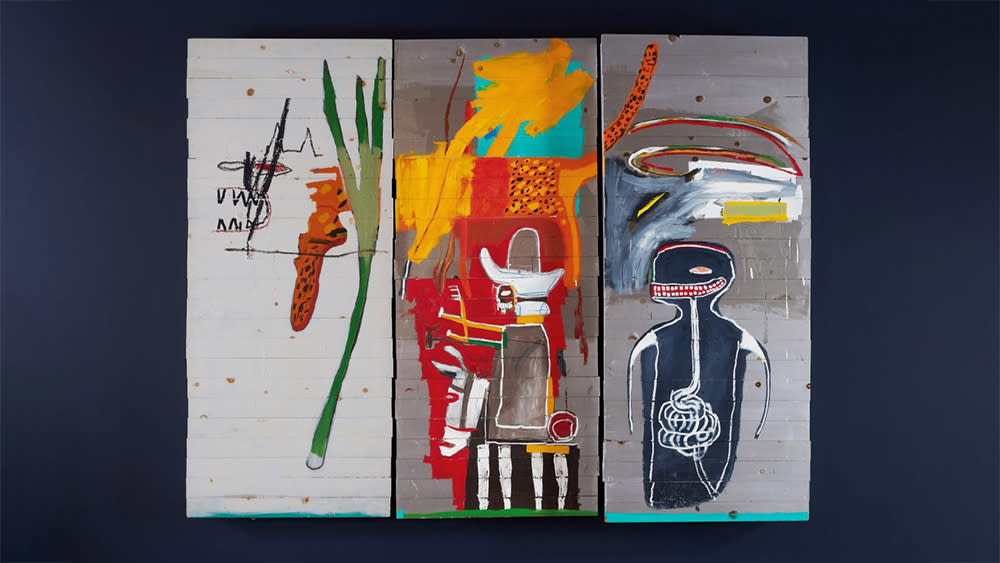 This Basquait painting became an iconic magazine cover in 1985. It just sold for $ 37 million.

A work of Jean-Michel Basquiat featured behind the artist on the 1985 cover of The New York Times Magazine– a story that confirmed the artist’s fame – sold at Sotheby’s Hong Kong for HKD 289 million ($ 37.2 million) with buyer’s premium on Thursday. The untitled triptych is now the eighth most expensive work by Basquiat sold at auction.

The triptych, which depicts two figures, one painted entirely in black with teeth and intestines exposed and the other straddling what appears to be a donkey, was sold in a live evening sale at Sotheby’s Hong Kong hosted by Taiwanese pop star Jay Chou. Chou appeared on ARTnews list of 50 collectors under 50 to watch.

Only two Hong Kong telephone bidders competed for the work, which was sold with an irrevocable bid. He went to a buyer on the phone with the president of Sotheby’s Asia, Nicholas Chow. The work reached HKD 250 million ($ 32.2 million), below its low estimate of HKD 255 million ($ 32.8 million), amid a silent auction hall.

Despite the work’s visibility at an important stage in the artist’s career, it failed to generate the auction drama that many Basquiat lots typically do at auction. Some reasons for this may lie in the fact that the untitled work is without the signature features that many collectors look for in Basquiat’s works: images of skulls, the artist’s distinctive crown image, code words or scribbles. The work is also far from the coveted year, 1982.

The anonymous seller of the work purchased it from an American collector on an unknown date. The previous owner bought it from Christie’s London in 2005 for just £ 1million.

The sale comes after a string of high prices obtained for Basquiat’s work, including the $ 93 million paid last month for one of the artist’s “Skull” paintings sold by Valentino co-founder Giancarlo Giammetti and the $ 50 million Versus Medici (1982) sold at Sotheby’s in New York in May. Thursday’s result is just behind the $ 41.9 million paid for warrior (1982) sold in the March sale of a single Christie’s lot in Hong Kong from the collection of German-American real estate mogul Aby Rosen.