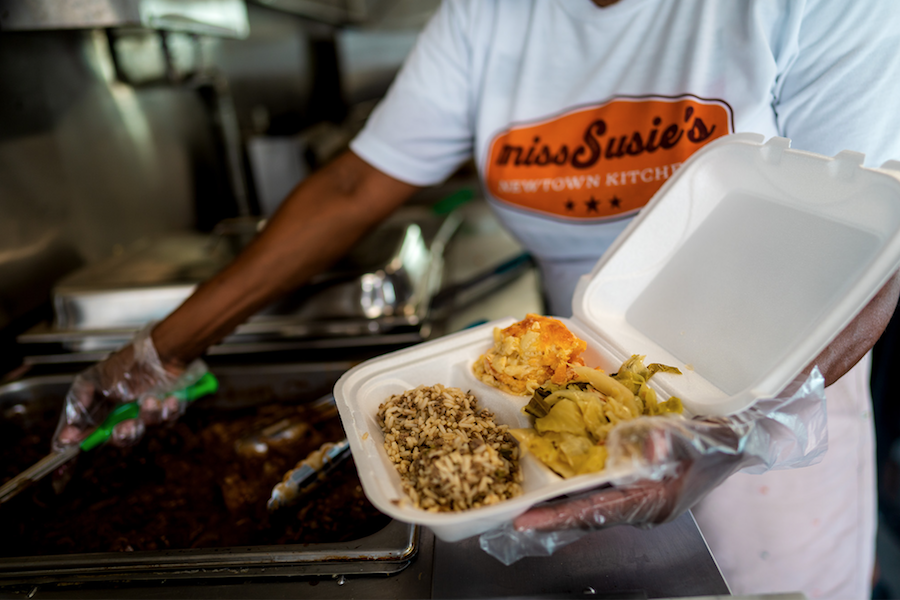 The spirit of Miss Susie

With an increased sense of empowerment within historically black communities themselves, Newtown’s food scene comes to life.

As a child, you could hardly pass the steps of Miss Susie’s social club on Martin Luther King Jr. Way without incurring her wrath. Fredd Atkins, 18-year-old former Sarasota mayor and city commissioner, remembers the atmosphere of intrigue that surrounded the place. â€œShe entertained the most sophisticated members of the community and didn’t want you to see who was in there,â€ Atkins says, â€œand even if you walked too slowly she would come out and push you.â€

Miss Susie operated in a thriving Newtown community and was rumored to even have a similar facility in Polk County. This enterprising woman, devout member and patron of the New Bethel Baptist Church, represented the spirit of effort that characterized Sarasota’s black community and helped its residents find prosperity in a small seaside slice of the segregated South. Atkins remembers a handful of other food establishments run by duds. â€œMiss Winnie was selling hot dogs for 10 and 15 cents, depending on the size, and burgers for 25 cents,â€ Atkins explains, â€œthen you had Miss Solomon’s and Miss Saver’s where you could get something to eat. Of course, part of the success of these establishments was a market hemmed in by Jim Crow-era laws that prohibited black residents of Sarasota from frequenting businesses outside of Newtown. According to Atkins, even in the 1980s, years after Sarasota was no longer separated by legislative decree, it ranked 13th in the country for strict demarcation of its residents by race. â€œTo this day, railways still seem like a border to me,â€ says Atkins.

The moral and ethical imperative of desegregation is indisputable, but it was not without its unintended consequences. Once the people of Newtown were allowed to spend their money outside the community, many local businesses failed. â€œOne of my biggest challenges is trying to explain to people that desegregation was hardly a guarantee that black people were getting better,â€ Atkins explains. And, along with the hard-earned money of Newtown residents going elsewhere, the Sarasotans’ refusal to do business in Newtown was adding to the economic pressure. All of this signaled the slow decline of black-owned restaurants in the Newtown community. Some have hung on, like the Town Hall Restaurant and Lounge, while others have found new incarnations, like Jamaican American Soul Food on 301 and MLK Way, which once hosted black blues bands as part of the Chitlin ‘Circuit. when the establishment was a nightclub called The Manhattan and owned by Newtown resident Johnny Simpson.

Today, spurred in part by growing movements to support more black-owned businesses, greater investments by local and national governments in historically black communities, and an increased sense of empowerment within these communities. communities themselves, Newtown’s food scene comes to life. â€œHe definitely has the feeling of a rebirth,â€ Atkins says. This revival resembles the Sarasota Newtown Farmers Market, which brings fresh produce to the Newtown community on Fridays and Saturdays and allows small businesses to showcase their produce. This revival is like Stroke’s Seafood at 2745 Osprey Avenue, which offers seafood and comfort food seven days a week, with shrimp and oatmeal for breakfast, burgers and fried fish sandwiches for lunch, and all kinds of combinations of lobster, snow crab and shrimp in the evening.

This renaissance is also embodied by Samantha Koch, who opened her food truck, C & D’s Sandwich Shop, as a leap of faith. She had a career in the healthcare industry for 14 years before falling in love with her job. Born and raised in Pennsauken, New Jersey, she grew up eating cheesesteaks and pizza of a variety she couldn’t find in Sarasota. With a passion for cooking and a dream to pursue, she decided to gift the city with her hometown favorites. â€œI really missed that food,â€ Koch says, â€œand it’s such a joy to share it with the people here and see them light up.â€ And the early success of his sandwich operation came despite the pandemic. â€œI was building the truck for a year and a half,â€ Koch says, â€œand there you go, I finish and I open and it’s ‘hello, COVID’. But, bolstered by the constant foot and car traffic on MLK Way, where she operates her sandwich shop, she quickly found an audience for her mouth-watering assortment of hoagies, from jerk chicken cheese steaks to sausages and peppers.

â€œThere wasn’t much on MLK in terms of food when I moved here almost 20 years ago,â€ she says, â€œand I hope more people in the neighborhood try to open their own places so that we have more variety without having to go elsewhere in town. To that end, the story goes back to Miss Susie – not the resurrected ghost of the fearless business owner of Atkins’ day, but a new incarnation with a similar spirit. Miss Susie’s Newtown kitchen was opened with great fanfare several years ago. Named in honor of the original matriarch, the restaurant project centered around soul food with a community twist. Born out of the imagination and passionate project of the late Steve Seidensticker, founder of the Tableseide Restaurant Group and its philanthropic organization Tableseide Cares, the restaurant was supposed to contribute to an economic revitalization of Newtown. Promising to hire from within the community while providing job training to local youth, the project stalled due to financial problems in the sad and untimely wake of Seidensticker’s death. But the project is back on track, led by the Seidensticker family and with renewed support from philanthropic entities and the City of Sarasota.

â€œLisa and Andrew Seidensticker have been asking me for some time if I would be interested in creating the menu for Miss Susie’s Newtown Kitchen,â€ says executive chef Golden Monix. â€œOnce they started talking about how they wanted to help the community and give back to the business district, I was into it. ” Although considerably younger than Atkins, Monix also remembers the original Miss Susie, how he and his friends all wondered what was going on inside. A football scholarship sent him to Arkansas Tech after graduating from Riverview High School. He worked in track and field after college, rising through the ranks to the position of unit director for the Sarasota County Boys and Girls Club. â€œBut I’ve always had a passion for cooking, so I went back to Johnson and Wales in Charlotte, NC and worked my way up through the restaurant and restaurant business,â€ says Monix.

While Monix and the Seidenstickers await completion of the brick and mortar restaurant on the site of Miss Susie’s former social club, they’ve built a food truck that they can use as a lab to try out potential menu items. . They hope to feed and revitalize the community with black-eyed peas along with smoked turkey, pork chop sandwiches, baked beans, cornbread and other soul food dishes. A 16-week professional training program created in conjunction with Suncoast Technical College will seek to train and place its students in hospitality jobs in Sarasota and beyond. â€œIn the short term, I would like Miss Susie’s to be a hub or an anchor for the community,â€ says Monix, â€œbut in the long term, I hope this will help grow the community. In the meantime, the community is already doing a great job of evoking the spirit of Miss Susie, laying the groundwork for increased growth and activation in a neighborhood with a long history of perseverance and prosperity.

Documentary “Treasure Hunters”, based on a New York Magazine article, in the works of Netflix and director Theo Love (EXCLUSIVE)