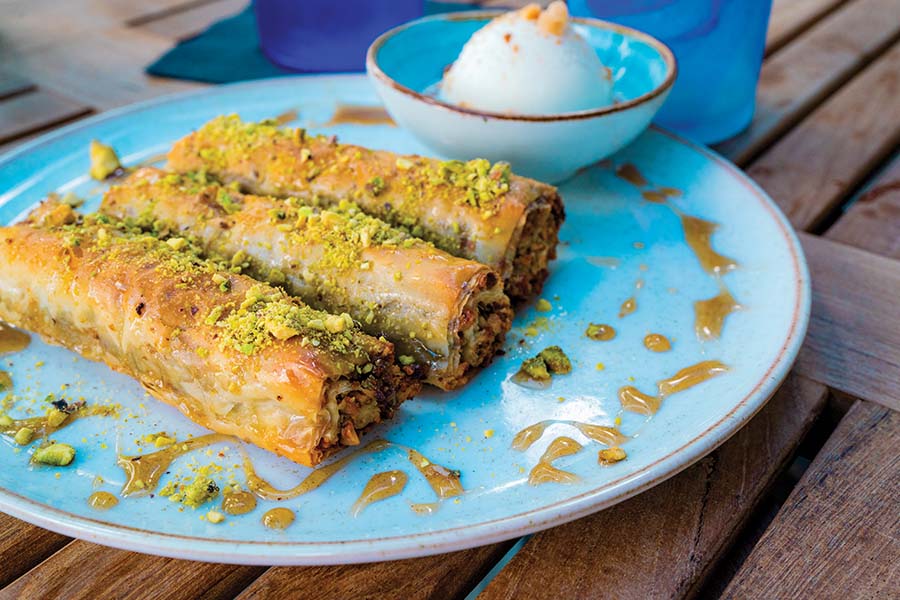 When the kataifi shrimp arrives at the Opus Restaurant & Lounge in Gulf Gate, the impression it makes almost defies words. While this may sound familiar to the Greeks, to the rest of us it looks like an absurd postmodern sculpture, a cheeky mix of aquatic life and a bird’s nest. The shrimp tails protrude from a tangle of threads, and each piece rests on a puddle of sweet and spicy cherry sauce drizzled with za’atar. In the end, after a little wonder and, admittedly, bewilderment, the dish is nothing more than a deliciously accessible piece of shrimp wrapped in threads of dough and fried. And that’s what the Opus seems to be doing with its entire menu; take something classic and flavorful like the Greek specialty of kataifi coated shrimp and augment it with seasonal and local produce.

Created in collaboration between owner Richard Carney and executive chef Kyle Harrington, the menu borrows from Carney’s culinary palate and Harrington’s gastronomic background, which began in the upscale kitchens of the Gasparilla Inn in Boca Grande nearly 20 years. Carney, a former interior designer from Buffalo, NY, and Harrington, born in south Philadelphia, was eager to celebrate the cuisines of the west coast of the Mediterranean, from Tunisia and Spain to France and Italy. Unsurprisingly, Carney also handled the restaurant’s modern yet warm design, with plenty of blue and earth tones offsetting the clean lines of the building itself.

A caponata pays homage to Carney’s Sicilian roots. Specifically, the inclusion of pine nuts skews the small plate towards the Catania style of the dish, but regardless of the region of Sicily, Opus’ caponata is dense with eggplant, zucchini, red peppers, tomatoes, olives, capers and parsley. Depending on how the local produce looks that day, Harrington can garnish the dish with parsley or basil, but either way, when layered on the toasted baguette, it looks more like a healthy appetizer than a light aperitif.

Another common application of caponata is to serve it with fish, and Opus does just that with the seasonal entry of Gulf snapper. A loose cut of snapper is gripped with the skin, giving it a bit of crunch and crunch that complements the buttery and delicate cut of the fish. The caponata sits under the fish making it easy to get all of the flavor profiles in one bite, including a garlic salsa verde so good it can make a corn dog taste heavenly on the mic -waves. A drizzle of lemon juice from the toasted lemon further broadens the flavor profile, adding a bit of pizzazz to an otherwise creamy dish. The gateway twist cocktail goes well with snapper. Composed of gin, crushed basil, St. Germaine, lemon juice and homemade ginger syrup, the dry, lemony and lightly sweet drink slices well into the richness of the plate.

But if rum is more your speed, the old-fashioned Opus is beckoning. Diplomatico rum, chocolate bitters and a coconut ice cube give this iteration of the popular drink less bite than its whiskey counterparts. This drink pairs well with the roast chicken starter, which is accompanied by a whole bird tanned as perfectly as a lifeguard on Baywatch. The juice from the roasting surrounds the generous portion of mashed potatoes (mashed potatoes) made up of two parts Yukon potatoes and one part cream butter. When all of that is combined with the mushroom sauce, umami is off the charts.

Steak frites offer what’s probably the easiest win on the menu, with a perfectly charred butcher’s steak served with fries that tick all the boxes – a little crisp, a little tender on the inside, deliciously flavorful. A harissa ketchup brings a touch of spice to the fries while a Spanish salsa should not be neglected on the side of the steak. Although listed as a starter, the plate can easily be shared due to the sliced ​​steak. If shared, it can make room for quattro formaggi peppers, the Opus version of a Buffalo favorite. Hungarian wax peppers, which can vary on the Scoville scale from bite to bite, are stuffed with ricotta, gorgonzola, pecorino, and mozzarella. The creamy cheeses on the inside make up for the heat of the peppers, although a tall glass of water should be left nearby.

While kataifi shrimp or Gulf snapper may be more deserving of Opus signature status due to their more ambitious and complex flavor profiles, the dish most likely to sell out every night is pappardelle. Yes, many Italian restaurants in the Sarasota area offer some form of braised short rib ragú served over freshly made pasta, but it’s such an unmistakably wonderful dish that it deserves a spot on any menu. The wide noodles are made from scratch, giving them the perfect al dente consistency, while a four to five hour braising time on short ribs leaves enough time for the fat to turn into a silky affair. and licking fingers. A fair warning. Like all comfort food, this dish is hearty, which means it should be eaten with caution if you are hoping to try any of the desserts at home.

A crisp, sticky baklava has a nutier profile than most thanks to a healthy dose of diced pistachios while a seasonal crostata uses Harrington’s mother’s dough recipe – and a legacy worthy of the name. Crispy but tender with a fork, the crostata is stuffed with compotes from all the seasonal fruits available. Accompanied by a Frangelico whipped cream, the dessert certainly deserves to leave room. For those with a bottomless zest for life, head to the Opus Lounge next door for a nightcap of homemade limoncello.