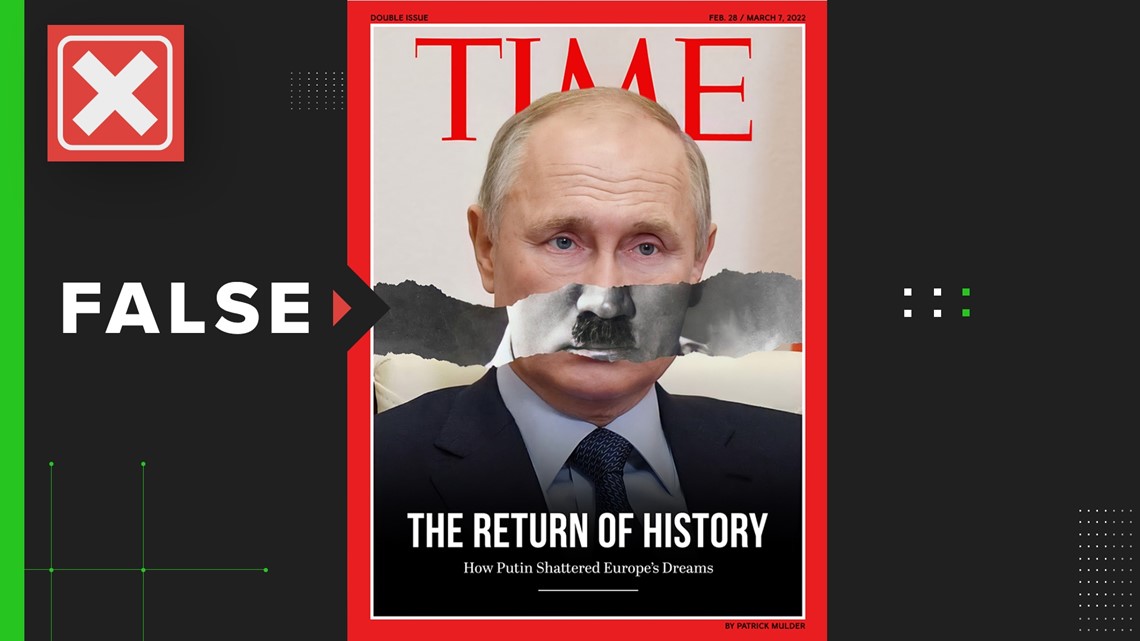 No, a TIME magazine cover with Vladimir Putin’s face superimposed on Adolf Hitler’s is not real

A viral photo claiming to be a TIME magazine cover alluding to similarities between Russian President Vladimir Putin and German dictator Adolf Hitler is not real.

On February 24, Russian President Vladimir Putin launched an attack on Ukraine. On March 1, Russian forces continued to attack two of Ukraine’s largest cities, kyiv and Kharkiv. The Associated Press reported the current ground war in Ukraine is the largest in Europe since World War II.

A photo purporting to show the latest cover of TIME magazine shows Putin’s face superimposed on the face of German dictator Adolf Hitler.

Is the cover of TIME magazine real?

No, the viral image is not a TIME magazine cover; it was created by artist Patrick Mulder as a commentary on Russia’s attack on Ukraine.

The viral image appears to be the cover of the February 28/March 7 issue of TIME magazine.

TIME magazine archives its current and historical covers in The vault. The official cover of February 28 / March 7 The issue is in those archives and features a young boy for the Kid of the Year edition – not Putin.

A TIME spokesperson confirmed in a statement to VERIFY that “the image is not an authentic TIME cover.”

Using a reverse image search tool, VERIFY was able to track the viral image to a Tweeter posted by Patrick Mulder on February 26.

In a statement to VERIFY, Mulder said he created the now-viral image, along with two others. On Twitter, Mulder wrote, “The image is one of three I created on the day Russia invaded Ukraine…I wanted to create something that adds to the conversation around the invasion of Ukraine and captures the mood of the audience.”

TIME has confirmed that the three images are not authentic covers for their magazine.

More CHECK: No, a viral video does not show a Russian paratrooper crashing in Ukraine. The video was taken in Brazil in 2021.