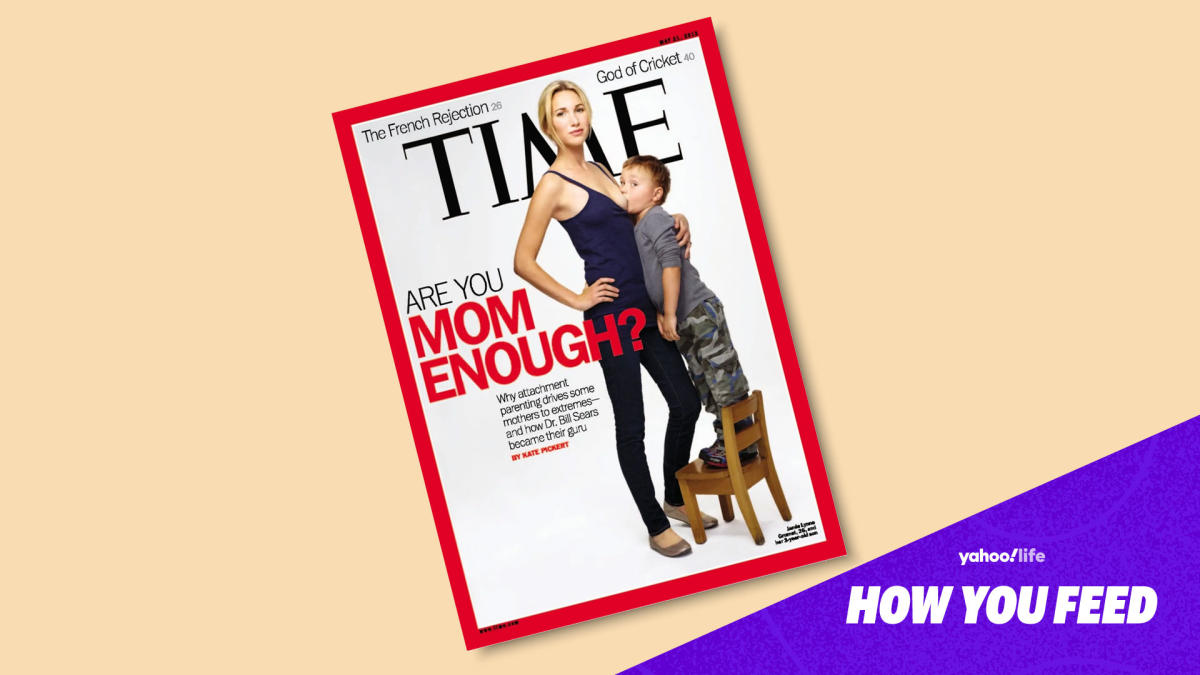 Breast, bottle, whatever: how you feed is a shameless series about how babies eat.

Anyone raising a young child in 2012 will probably have at least a vague memory of Jamie Lynne Grumet: she was the young blonde mother who graced the cover of Time magazine that year with her almost 4-year-old son, Aram, as he stood in a small chair next to her, breastfeeding, both of them giving casual “oh, hi” looks at the camera, next to the glowing red cover line, “Are you mommy enough?”

And for those who missed that iconic moment, know that the most telling part came after, in the fallout, through a media circusat the height of “mom wars“, dictated mainly by the pearl shock and horrorwith a lot of sexualization and ridiculous thrown in.

Grumet posed again nursing her son shortly after, for the cover of a non-profit quarterlyand stuck to his guns about parental attachment — a parental approach, invented by Dr. William Searswhich involves bed sharing, babywearing and prolonged breastfeeding, which she remembered doing as a child, until she was 5 or 6 years old.

“It was a normal part of life,” Grumet, now a 36-year-old mother of teenage sons aged 14 and 15, tells Yahoo Life Today of her own vague memories of being breastfed. during his school years, which was so regular. occurrence only one incident stands out. “I remember once when I was breastfeeding and there was an earthquake.”

As for her breastfeeding Aram – not to mention her adopted son Samuel, who was picked up from an orphanage in Ethiopia at the age of 4 – the memories are powerfully vivid. It was a blog about the adoption process – in fact, started at the time of her “horrible pregnancy” at the age of 21, plagued by severe morning sickness and preeclampsia and the difficult premature birth of her mother. ‘Aram at 31 weeks – who had him noticed by someone at Time.

“They put him on oxygen but he had no sucking reflex, and it took two weeks to establish a breastfeeding relationship in the NICU,” Grumet recalled of Aram. “My [now] my ex-husband knew how important breastfeeding was to me, so he rushed to get my colostrum up, and everyone was so supportive. I don’t know if I could have produced milk otherwise. But, luck of the draw, my mom had an oversupply, and I inherited it from her.”

Meanwhile, in her blog, she began sharing her thoughts on attachment parenting and breastfeeding. “I didn’t know it was public,” she says. “I thought my family would see it. But then I started getting comments from other women, and I didn’t realize it, because I was brought up with such an open relationship to breastfeeding. …that there were these “mom wars” or whatever. Women needed encouragement.

Time found her for her story of attachment parenting. Grumet agreed to be part of it, and she, Aram and her then-husband traveled to New York for the photo shoot, leaving Samuel with his grandparents. “The photograph [Martin Schoeller] was a lovely person…it was ironically at a studio called Milk Studios,” she recalled. “They forced [the shoot] around his nap, for him to breastfeed…and the picture wasn’t the one everyone really wanted. We weren’t really posing.” There was also no promise that she would be on the cover. “Even the day before the story, they were like, ‘If nothing bad happens [news-wise]you’ll be the cover.'”

It must have been a slow news day, because the rest is history.

“We didn’t realize the magnitude of this story until some of the PR people called us after, saying that Dr Sears was going to be on the Today To display, do you want to be part of it? To this day, he’s like family…so I said I’d love to…and we all flew to New York. That’s when the media circus started and the photos were released.” More TV appearances soon followed.

At one point, she recalls, the family was taking a media break by having lunch in the Time cafeteria, while her husband looked at all the articles and social media posts. That’s when he found a mocking picture created by Rush Limbaugh, in which Grumet had replaced the Statue of Liberty. “Aram sees himself nursing on it,” she recalled the moment, “and says to her brother, ‘Oh my God, Samuel, I’m nursing the Eiffel Tower!'”

But the media scrutiny scared her off, Grumet recalls. “I was really scared. I remember being scared of the unknown. I didn’t know what to say. I didn’t like the picture, but I wasn’t crazy about it, I wasn’t harmed by it. Time or a victim, but I didn’t feel well either. It was really confusing to process all those feelings.”

She didn’t treat them well, according to her own account. “I haven’t had a breakdown or anything, but [I felt] outdated, and I could have been more present with my children,” she says, “but instead I got into nonprofit work, working in sub-Saharan Africa and with war refugees in Europe. .”

Today, Aram has the Time blanket, framed, hanging in his bedroom in Oakland, California. “He always loved her and still loves her,” Grumet says. “It brings me to tears thinking how bold he was when I wanted to cower for his benefit.”

But while she sometimes wanted to hide, she adds: “I never felt bad about treating him.”

The same goes for Samuel, who she noticed, shortly after his adoption, “was really curious about breastfeeding Aram.” Speaking with their doctor, and “super adoption specialist”, they were told to treat Samuel as they would treat a biological child. “I offered my breast, in tandem, and he latched on well,” signaling that he was breastfeeding recently, as children lose their ability to latch on after a while, she says. The doctor said he would probably wean as soon as he learned to speak English, which happened after just a few months.

Breastfeeding him for that short amount of time, Grumet recalls, “helped Aram see that he was his equal, and it helped me bond, because I always felt like I was keeping the ‘somebody else’s child. She adds, “It really helped me and the whole family. It was something comforting and something from home that I was able to give to him.”

She finally wrote a book, in 2019, Modern Attachment Parenting, with a foreword by Alanis Morissette and an introduction by Sears. “[Wife and fellow expert] Martha Sears sat down and edited every part,” Grumet says. “It was such a wrapped up moment, trying to bring Dr. Sears into modern times. She adds that she’s noticed a shift toward normalizing breastfeeding, both widely and in public, thanks to both visible celebrities and the American Academy of Pediatrics, which updated her breastfeeding recommendation from one year to two, bringing it in step “with all the other health organizations around the world”.

Still, Grumet emphasizes that she doesn’t challenge the currently popular belief that “nourishment is best.”

“If you don’t want to breastfeed, that’s fine, but more than 80% wantand at some point that’s thwarted – whether it’s due to no paid time off, stress, low milk supply…I think that’s a valid social issue, and we have to support all mothers,” she said.

And Grumet is not about to back down on these questions: remarried just a year ago, she and her new husband are going to have a third child.

“I’m trying to have another baby right now,” she says. “I have secondary infertilityand we’ve made IUIs that keep failing. But they are determined, including when it comes to breastfeeding this time around. “If I couldn’t breastfeed in the future,” she says, “I’d try donor milk first and go from there.”

Don’t forget to #ShareHowYouFeed! Tag us to share your own food journey.

Well-being, parenthood, body image and more: discover the who behind the whoo with the Yahoo Life newsletter. register here