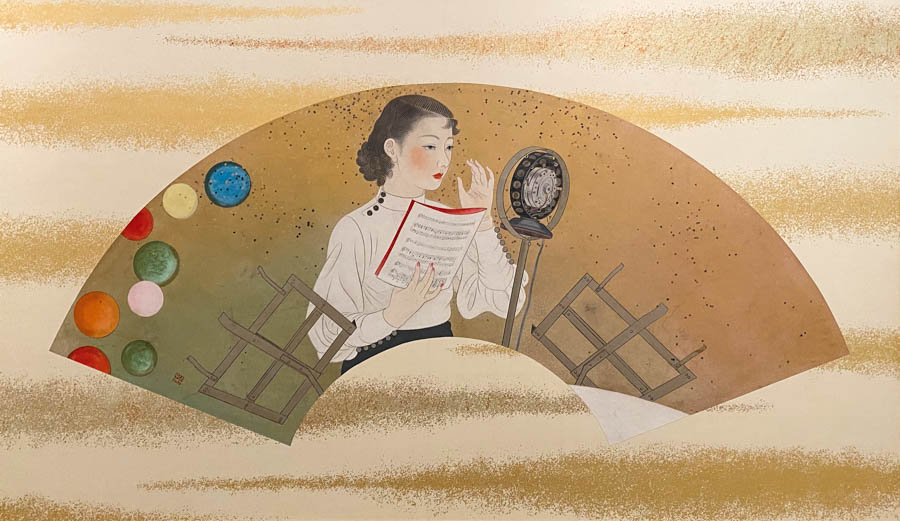 Enomoto Chikatoshi (Japanese, 1898-1973). Florida, approx. 1935. One of a set of six paintings mounted as framed panels; ink, color and gold leaf on paper. Courtesy of the artist.

Cigarette smoke hangs a thick curtain over the dance hall. Sweat gushes from your brow as bodies twist and turn at the corners of your field of vision, swirling in and out of sight. The raucous horns of a jazz band ring in your ears, driving the chaotic mass. Tokyo’s elite watch from afar. Outside, the still bubbling city continues, oblivious and uninvited to this sound show. Wearily walking towards their industrial alibi, disconnected from this youthful aura. But inside Ballroom Florida, you’re connected. You are part of something – a feeling, an energy, a movement of modernism that has swept across the country like a tidal wave in the age of jazz in Japan.

That energy is alive again in the Ringling Museum’s Florida: Deco & Desire in Japan’s Jazz Age Ballroom. The exhibition features six paintings by renowned Japanese painter Enomoto Chikatoshi and a photograph by modernist photographer Hamaya Hiroshi illustrating the feminine, art deco atmosphere of the Ballroom Florida, along with various assorted objects reminiscent of the ballroom. “The subject of the paintings and photography are apparently women who worked at Ballroom Florida. The Ballroom Florida was famous for its very handsome, elegant, and skilled Taxi Dancers, professional dancers paid to dance by club patrons. Another painting represents a woman who sings, probably a cabaret singer or a jazz singer. Many women, however, are lounging around and could have been patrons themselves,” says Rhiannon Paget, curator of Asian Art and Ballroom Florida: Deco & Desire in Japan’s Jazs Age at the Ringling Museum.

Founded in 1928, Ballroom Florida quickly became one of the most prestigious jazz-era dance halls in Japan. The splendor of the nightclub’s art deco interior, its team of attractive and knowledgeable “Taxi Dancers”, and its penchant for bookings from the biggest names in jazz – foreign and domestic – set it apart from other venues. “Ballroom Florida was one of the most prestigious and elegant dance halls in Japan. It attracted a lot of celebrities and an international clientele and also attracted a lot of business from the new rich. The Florida had the most fashionable interior – they had Bauhaus style tubular furniture, electric lights and a fantastic stage. They also hired a lot of dancers – who were said to be the prettiest and most glamorous around. Not only did this attract male customers, but it also ensured that you always had a qualified dance partner for social dancing,” says Paget.

In its heyday, Ballroom Florida was emblematic of the pre-war modernism ushered in the era of Japanese jazz. Following the country’s rapid industrialization in the mid-19th century, Japan became a hub of cross-cultural influences with the Western world. Among the artistic and cultural exchanges were changes in the traditional Japanese social structure.
“Dance halls were a new type of venue in the 1920s and 30s that allowed people to participate in social dances, which is not traditional in Japanese culture. However, by the end of the 19th century, the he Japanese elite saw that dancing was something people did in diplomatic parties – it was a good way to cement relations. They realized that if Japan wanted to be a modern country, they had to offer it to diplomats and officials who came to Japan from the west,” Paget explains.

Interest in social dancing quickly filtered from official circles to the masses – and a younger, cosmopolitan population eager to embrace modern, westernized culture. A booming economy led to the development of multi-level department stores and the nation’s first subway system, spawning a new generation of independent, socially liberated women who traditionally would never have left their families in the countryside. These women – or “Moga”, a contradiction of the modern girl in Japanese – and their male counterparts, “Mobo” (modern boy) longed for places where it was socially permissible to interact with the opposite sex and indulge to foreign music. Dance halls, like the Ballroom Florida, were the perfect place to do this.

Western influence did not stop with changing social trends. The Art Deco design of the Ballroom Florida was one of the stylistic hallmarks of the nightclub and of the Japanese jazz era as a whole. “Art Deco really took root in Japan after 1925. 1925 was the year of the international exhibition in Paris and many Japanese artists, painters and also metalworkers, ceramists all went to this exhibition. This caused an explosion of Western-style art deco design. But of course, in Japan, they don’t just copy. They kind of took the principles of the style and applied it in a way that made sense and made sense to themselves,” says Paget.

Ballroom Florida: Deco & Desire in Japan’s Jazs Age uses various objects and sounds from this art-deco design to create a multi-sensory experience reminiscent of Ballroom Florida. “There are approximately 40 objects, which include ceramics, ironwork, cloisonné, lacquerware and smoking sets, as well as prints. We have about 15 songbooks – harmonica or ukulele sheet music booklets with really wonderful covers made by fairly well-known designers of the time who specialized in this type of graphic design,” explains Paget.

Paget also complements the exhibit with music by Midge Williams, an African-American jazz singer who rose to prominence performing at Ballroom Florida. As much as the dance hall was emblematic of the westernization of social culture and design language in Japan, it was equally famous for hosting the biggest names in jazz from around the world. “The Ballroom Florida was a multi-sensory space and their music was so famous that I wanted to cultivate a more immersive experience for the viewer,” says Paget. “Midge Williams was one of the real gems to emerge from that era,” she adds. “I read that in her time she was more famous than Billie Holiday, but sadly she died young and was forgotten,” says Paget.

The art deco style of the Ballroom Florida harkens back to what Paget describes as “constructed exoticism” – or taking the idea of ​​what feels exotic and otherworldly and applying it to your own decor. Even the name of the Tokyo dance hall “Ballroom Florida” is not of its own origin, but rather taken from a Parisian nightclub with the same nickname. “There are these two layers of exoticism. The chic Parisian atmosphere of the Ballroom Florida in Tokyo, then obviously the Parisian place bears the name of Florida by fascination for tropicality. I was curious how this idea of ​​creating your own exoticism comes to fruition in this place, the Ballroom Florida, and then how you see that in other types of art deco visual and material culture,” says Paget. So why is it important to tell the story of a long-forgotten nightclub from a bygone era that operated on the other side of the world? Why is the Florida Ballroom and the people who inhabited this space nearly 100 years ago important?

It’s important because people come to Florida, to Sarasota, to pursue their own version of paradise, to create their own sense of what’s exotic and different and new. At a time when we live as safely as possible in our perfectly organized realities, taking the time to experience an environment entirely foreign to our own – perhaps that of a Tokyo nightclub in the 1920s – can allow us to push back the limits we put on ourselves. “It makes the world a little smaller,” Paget attests.