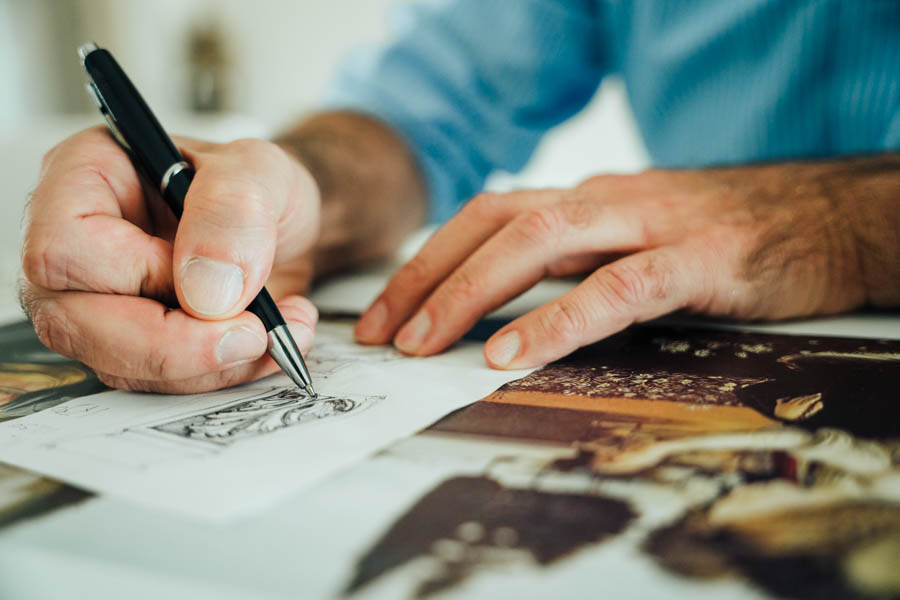 Dubbed a “modern-day Michelangelo” by his dedicated clientele, Luca Mancini an Italian artist– came to Lakewood Ranch in the winter for a jaw-dropping order. At the very beginning of January, Mancini painted a fresco of The Annunciation by Leonardo da Vinci on the ceiling of Mary Ann Cricchio’s Lake Club house. Cricchio, who guides small groups through the Amalfi Coast, Tuscany, Sicily and Venice with his agency, Da Mimmo Tours of Italy— discovered Mancini while living abroad. “I brought it here from Italy to my newly built house to reproduce a mural of The Annunciation on the ceiling of my large bedroom,” says Cricchio. “I realized that it is a phenomenon for my friends and neighbors. I believe it’s because they’re just not used to seeing something like this in the United States of America, especially in Lakewood Ranch. Mancini was the perfect artist to make it happen, says Cricchio. He was born in the province of Asti, Italy, and studied at the Academy of Fine Arts in Turin. He has worked as a figurative painter and interior designer and over the past two decades has worked on projects in Turin, Milan, Liguria, the French Riviera and the Amalfi Coast.

Cricchio’s neighbors were absolutely amazed by Mancini’s rendering, she says. The Lake Club is one of Lakewood Ranch’s most exclusive villages – with custom estate residences inside the gated community –and Mancini’s art adds another level of luxury to Cricchio’s home. “My neighbors came to see him. I just think it’s so rare for Americans to see that,” Cricchio said. “I know Europeans see a lot of churches and palaces, but it’s really, really interesting to Americans here. Cricchio has lived at Lakewood Ranch for less than two years, having moved from Baltimore, Maryland. She moved to the area with her son, Mimmo, after selling the family’s Italian restaurant, Da Mimmo, in the Little Italy section of Baltimore. Mary Ann Cricchio moved into her new Lake Club home at the end of December 2021. Cricchio and her late husband, Domenico “Mimmo” Cricchio, were well known in Baltimore’s Little Italy community for decades. Their restaurant offered signature veal chops, and the area was famous for sending limos to bring diners to their tables. Da Mimmo has hosted many famous entertainers and sports legends, whose photographs lined the restaurant’s Roman Cocktail Lounge. Mary Ann Cricchio worked in the hospitality industry for 42 years and ran her restaurant for 36 years. She served as president of the Restaurant Association of Maryland and of Hospitality and Tourism for the State of Maryland. She served on the board of the National Restaurant Association and even represented the United States in an advisory capacity at the Beijing Olympic Committee prior to the 2008 Olympics. Her religion also figured prominently in her life. “I am a devout Roman Catholic and believe my faith has been the foundation of our strong family foundation for so many years, even after losing my husband (and Mimmo’s father) in 2003,” Cricchio says. “As such, the project of painting Leonardo da Vinci The Annunciation in my home is a way that I feel I honor God for all the blessings He has given us.

Mancini first painted for Cricchio in his summer residence on the Amalfi Coast in Italy; the commission was a representation of the Italian artist Michelangelo The Creation of Adam. Michelangelo’s original fresco, which forms part of the Sistine Chapel ceiling, was created between 1508 and 1512. It illustrates the biblical story of creation from the book of genesisin which God gives life to the first man, Adam. “I was very impressed with Luca’s work and his dedication to the job at hand,” Cricchio says of the painting. “It was a no-brainer to bring him to Lakewood Ranch so he could replicate another famous work for my home here.” The Annunciation project wrapped up in mid-February, before Mancini returned to Italy to complete a commission of the “14 Stations of the Cross,” Cricchio says. “It has been very exciting to experience the development of this mural daily with an artist of the caliber of Luca Mancini,” says Cricchio. “He created for me a memento of his development and a work of art in my home that will last for the rest of my life.”

But the piece’s significance goes even further than that of Cricchio, she says. The Annunciation was created by the Italian Renaissance artist da Vinci between 1472 and 1476. It depicts what was a popular biblical subject in 15th-century Florence: the angel Gabriel announcing to Mary that she would miraculously conceive and give birth to a son (to be named Jesus and called “the Son of God”). On his website, Mancini states that he investigated “intimate painting linked to the human soul” and that his paintings are characterized “by a rare realistic and poetic intensity”. This poetic intensity is evident in Mancini’s work at Cricchio’s Lakewood Ranch home – in an awe-inspiring piece that she and her family cherish.