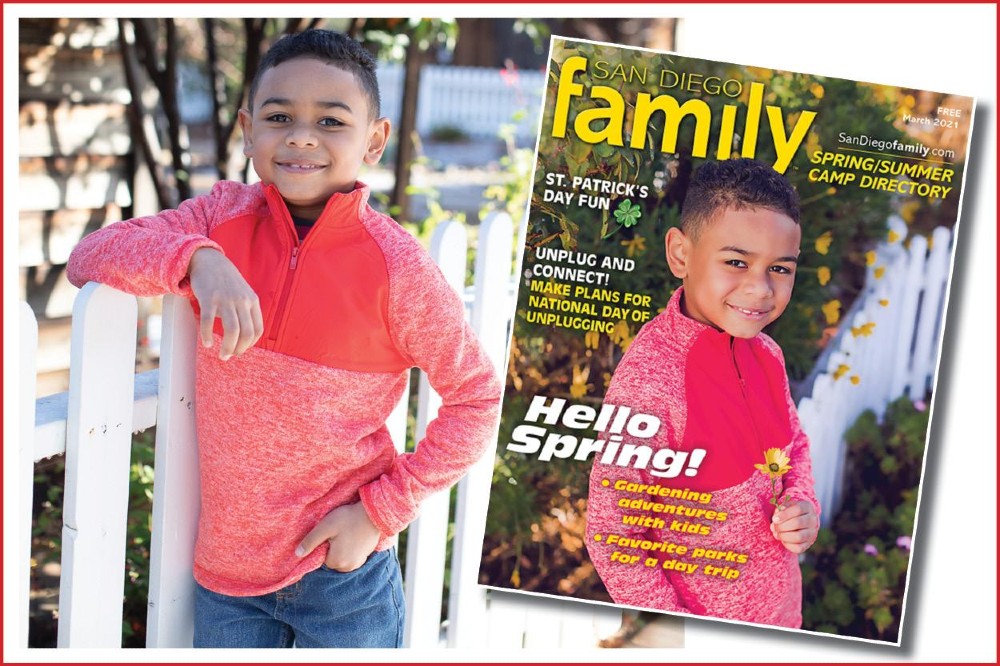 San Diego Family, a four-color, glossy monthly magazine now in its 39th year of publication, is looking for bubbly and photogenic children, ages 2 to 11, to feature on a future cover of its magazine and Out & About with Kids, its annual family adventure publication.

The search for the publication’s cover began on April 1 and will end at midnight on May 15. Sharon Bay, editor, said about 20 finalists will be selected from four categories, including ages 2-4, 5-7, 8-11. and multiples. Two winners from each age category and one multiple will be selected following an interview on June 5th.

The cost to submit a photo and request is $ 25 per child or $ 35 for multiples. To enter your adorable child, visit the children’s search link on the cover. Participants must live in San Diego County.

The San Diego Family Annual Coverage Search is a fundraiser for the Special Needs Resource Foundation of San Diego, a nonprofit organization that helps families of children with special needs. The San Diego family has long supported the foundation.

Xenia Moore, with over 25 years of experience in technology marketing and communications in B2B and B2C audience relations, has joined Altium as Senior Director of Public Relations and Brand Communications.

Previously, Moore ran his own consulting firm, called Moore Media Relations, founded in 1995. His clients included Robo 3D, Olloclip, LifeProof, Henge Docks and Blisslights. In the 1990s, she ran the San Diego office of Palo Alto-based Franson, Hagerty & Associates, which was one of San Diego’s largest public relations agencies at the time.

Altium, a global software company headquartered in San Diego, provides electronics design software to engineers who design printed circuit boards. The company is listed on the Australian Stock Exchange under the symbol ALU.

The San Diego-Imperial Counties Chapter of the Public Relations Society of America will host an online panel discussion on “The Creative Economy of San Diego” from noon to 1 p.m. on Friday, April 23, on Zoom.

Speakers will discuss a study recently released by the San Diego Regional Economic Development Corp. which revealed that local creative industries generate approximately $ 11 billion in economic benefits per year for the region. The creative industry is defined as the non-profit and for-profit businesses and individuals who produce cultural, artistic and design goods or services, and intellectual property.

San Diego’s creative economy is estimated to employ more than 107,000 people in nearly 7,400 businesses and organizations. The study used information from 2019, before the COVID-19 pandemic.

The cost to attend the webinar is $ 10 for members, $ 15 for non-members. For more information, visit www.prsasdic.org.

The San Diego Professional Section of the National Society for Professional Journalists announced that entries will now be accepted for its 2021 journalism competition. Categories include reporting and writing, as well as digital, photographic, video, and academic media. This year’s Distinguished Coverage Award, one of the SPJ’s many special prizes, will honor reporting on the topic of the 2020 COVID-19 pandemic or issues of racial equality.

The awards are expected to be announced in July. The early deadline with a $ 5 discount for each registration fee is Monday April 26 at 9 p.m. The final deadline is Monday, May 3 at 9 p.m.

SPJ also accepts applications for scholarships from university students. The scholarships are available in the paper, photojournalism and video-audio-multimedia categories. Two special $ 1,000 scholarships are named after two deceased journalists, including Agnes Diggs, former columnist for the late North County Times, and Bradley J. Fikes, who covered science and technology for The San Diego Union-Tribune. The deadline for scholarship applications is Monday, May 3 at 9 p.m.

More information about the SPJ journalism competition and scholarships is available at www.spjsandiego.org.

Rick Griffin is a San Diego-based public relations and marketing consultant. His MarketInk column appears weekly on Mondays in The Times of San Diego.