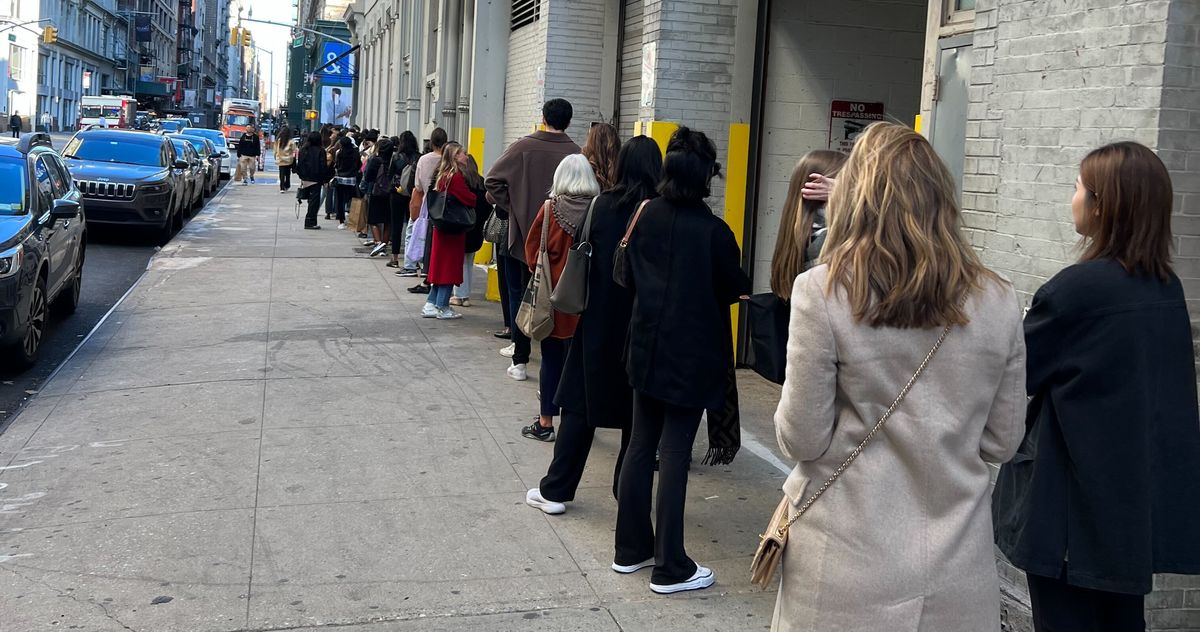 Is The Row sample sale worth the five hour wait?

Meagan Weas stood in line for at least two hours on the first day of The Row sample sale. For her, it was worth it. “I like the quality,” she said. “I love that there are no labels anywhere.” Inside, she said the mood was quiet — mostly: “There is are some of your classic, crazy people will “take things away from you”.

Inside, Weas had to defend a bag from another impatient customer. “There were ten of us waiting for more bags to come out like hungry animals,” she said. Weas had asked a “nice saleswoman” if more bags could be brought to him, and as soon as they were, another woman pounced on them. “I held on,” Weas said.

She was part of a crowd (some people waited until five o’clock to enter) that had gathered outside the door of the Metropolitan Pavilion, an event space known as the pseudo-house of sample sales. Presiding over the scene was an intimidating man in a dark suit, sunglasses and an earphone cord hanging from his neck – a Gandalf of glamor letting in a handful of lucky people at a time. The line that erupted from behind him was at least five people wide, taking up the entirety of the already graceful sidewalk.

Customers of The Row showcased sleek, low ponytails, long, neutral trench coats, polished vintage loafers, expensive-looking mules, dainty ballet flats, rich-looking knits, and a plethora of dissociative looks exuding the attitude of “If you know, you know.” It’s no surprise, since The Row (the brainchild of Mary-Kate and Ashley Olsen) has come to define a kind of luxury that says, “I have a summer house in the Hamptons, but don’t It’s understated, without logos and of unparalleled quality.All of that, the key to showcasing wealth – like this cashmere coat that sells for $11,500 – was 80% off.

“It was chaos,” Nikki, a 27-year-old sampler, told me, grabbing four pairs of shoes from the first few hours she’d spent waiting in line. “It was a crazy crowd vibe. There was a lot of confusion. »

“The queue to check out was an hour. Chaos,” Peters told me. “But such camaraderie in the dressing room – like, everyone helps decide what looks good, even if no one knows each other.”

From the outside, the same vibe seemed to emanate from people shuffling through the very slow queue. The posh women chatted among themselves and mingled. “We made some really good line friends,” Nikki said.

Outside, I approached a well-dressed man named Ronald, 81. I asked him if he had been a fan of The Row for a while, to which he replied, “A row? Yes, I said, he was online for The Row sample sale. “I think maybe I’m in the wrong line,” he replied and walked away.

Minutes later, I saw a pair of women follow Ronald’s lead, deciding they weren’t cut out for the waiting game that being a part of Club Row now apparently required.

A 27- and 29-year-old man, who asked to remain anonymous but who both work for a television production company, left the line just as he came to the corner of 19th Street. They had waited 40 minutes and, seeing the few hundred people still ahead of them, decided enough was enough. “It’s going to close, and you don’t know what’s in it,” one said. The two told me they thought TikTok was to blame for the congestion, saying that before the app “nobody knew” about the sample sales happening in the city: “It is it, though. For people, that’s what sample sales are for.

As the sun began to disappear behind the buildings, I decided I was probably tired of pacing while receiving sideways glances from better-dressed counterparts. On the way out, a woman in Golden Goose sneakers walked by, talking on her phone and visibly upset. “I’ve never seen anything like it. People are not moving,” she said. “I’ve been to Hermès sample sales, and it’s worse.”

By submitting your email, you agree to our Terms of Use and Privacy Notice and consent to receive email correspondence from us.

In a pinch? Here are the four loans you can get the fastest