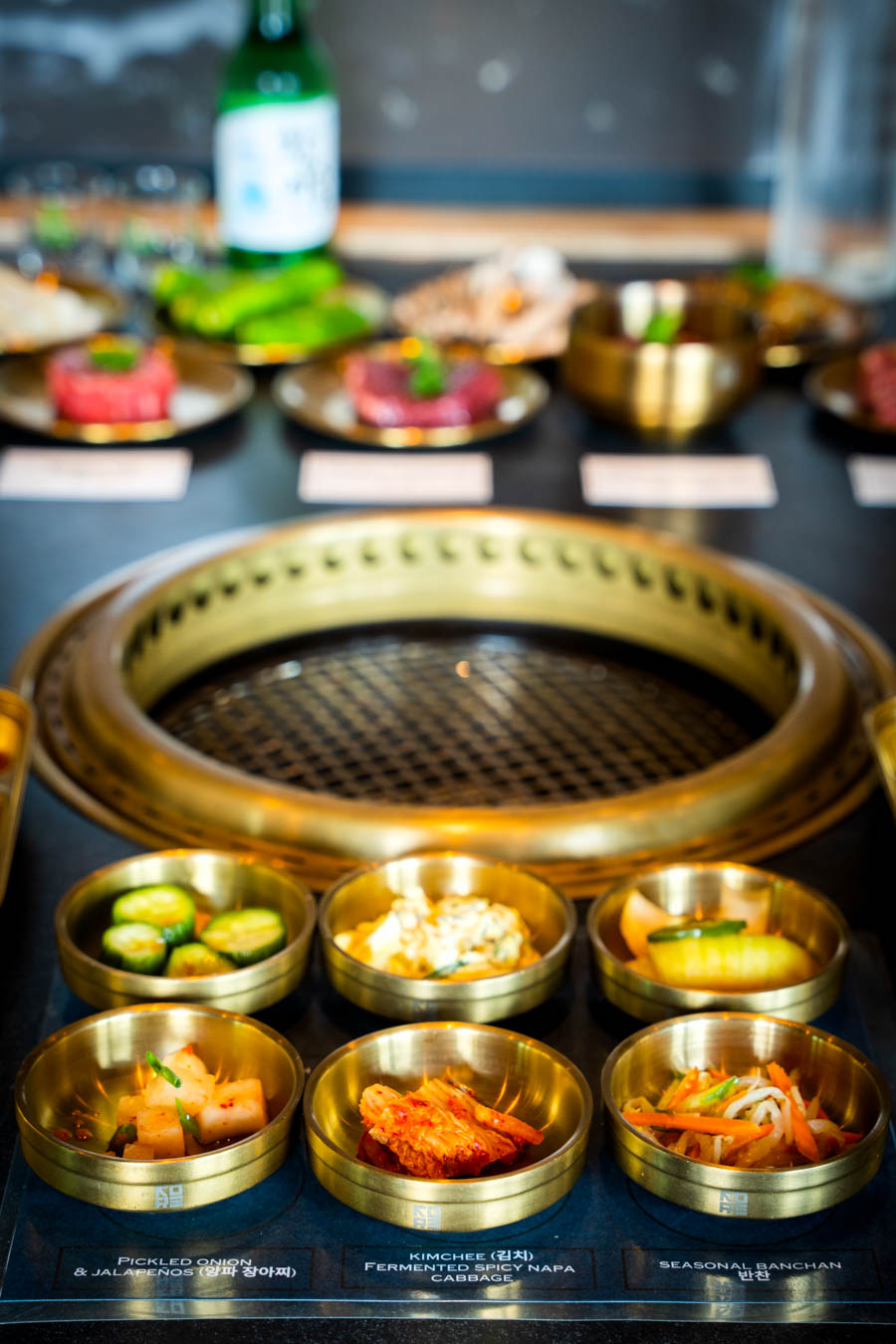 One of the great joys of standing in front of an open flame to manage a grill full of cooked meat is taking a sample of the goods right off the grate. Something in the still sizzling juices retains a fire elemental component that dissipates once it’s been put off the grill for even 30 seconds. In the United States, that joy is most often reserved for the lone grillmaster in the form of a small but glorious fee collected for his service to hungry mouths waiting at a nearby table. At Korê Steakhouse, however, a new no-tip Korean barbecue restaurant in Waterside Place, every diner shares that small but glorious tax as grilling and eating are turned into something communal.

WHILE THE COMBINATION OF MEAT AND BANCHAN REINFORCES THE COMMON PATTERN, AN EXTENSIVE MENU OF MORE TRADITIONAL AND SIZED CUTS OF MEAT IS ALSO AVAILABLE FOR GRILLING AT THE TABLE.

The concept comes from Korea, where owner Daniel Dokko, who also owns the popular JPAN, traces his cultural heritage. Specifically, his parents were born in Korea, immigrated to Brazil where they had Daniel and sent him to school there alongside a large Japanese immigrant population. By the time Dokko was 15, he knew he wanted to open a restaurant. So when he moved to the United States in 2002, he traveled countless kitchens and mastered the art of sushi, then made the savvy business decision to open a Japanese restaurant to capitalize on his increased popularity by compared to Korean cuisine (at the time, anyway). It was in 2008 when he opened JPAN. After more than a decade and a half of success for its flagship restaurant, Dokko felt it was finally time to return to its Korean roots.

But rather than replicate the same successful formula that worked with JPAN – inspired cuisine and cocktails that elevate the casual dining model – Dokko opted to showcase the region gogi-gui. The Korean style of barbecue calls for a grill set into the dining table itself, with meat, vegetables and assorted side dishes spread around the table, all meant to be shared with the cooking task on it. -same. And it is the act of cooking together that turns the dining experience into heightened social activity.

A neat introduction to the concept is the Butcher’s Pride combination of grill dishes that arrive at the table on a cart. In addition to banchan (assorted sides like kimchi and spicy pickled cabbage), this combination comes with starters of green onion salad and cheese corn, the latter an invention of Korê’s chef and former sushi chef. of JPAN, Clark Park. During and after the Korean War, American GIs introduced corn to the country, which now consumes it in soups and, in particular, in pizzas. The Cheesy Corn Appetizer pays homage to this history and includes corn cooked in a small cast iron dish with mozzarella cheese. It serves as a good addition to the simple green onion salad, which lets the sesame oil and onion leaves speak for themselves. As for the shrimp tempura, the fried pieces come with a kimchi aioli, a sauce that should be saved for dipping other foods.

VARIOUS CUTS OF BEEF, INCLUDING A FILET MIGNON, IS GRILLING ON THE TABLE GRILL.

In terms of a proper drink, a bottle or two of soju would serve a pair or trio of diners well. The clear distilled beverage is the most consumed drink in Korea and enhances the sharing style of the dining experience when consumed in the most traditional way. This traditional manner sees drinkers pour each other small glasses, with a small toast before pulling the glass of liquor which tastes similar to gin but without its floral tones or excessively dry bite.

Bites and soju offer diners a great opportunity to familiarize themselves with what will become the modus operandi of the evening, namely the passing and sharing of food. When it’s time to grill the meat, all the techniques learned for sharing appetizers come in handy. Korê provides their dinner chefs with nothing more than a pair of tongs and a pair of scissors, and those two tools are all they need. With the tongs, a diner grabs one of the raw meat selections and places it on the hot grill in the center of the table. A quick sear of 90 seconds to 2 minutes per side is enough for most meats. Once the pieces are cooked to the desired temperature, they can be cut into bite-size pieces with the scissors and served. “It’s even better to just grab your chopsticks or fork and eat the meat right off the grill,” says Dokko.

SAKE AND SHISHITOS ARE A MAIN MAINSTREAM IN THIS SWANKY KOREAN HOTSPOT.

It should be noted that Dokko sources its premium meats from reputable suppliers. Most of the beef comes from Snake River Farms in Idaho, one of America’s premier producers of Wagyu beef. Cheshire Pork in North Carolina provides Dokko with their deliciously marbled pork that makes even a quick searing of the pork neck, for example, a silky, mouth-watering bite. In all, the Butcher’s Pride combo includes pork belly, tenderloin, NY striploin, ribeye, pork neck and marinated galbi (short rib). Most cuts are thinly sliced ​​and lightly seasoned with just salt and pepper, providing the opportunity to let the flavor of the meat speak for itself. This extensive survey of meat offerings adds to the community-based approach to Korean barbecue, as new cuts are constantly being circulated on and off the grill during the meal.

Unsurprisingly, the pickled galbi is the tastiest due to its abundant seasoning, but each of the meats are also excellent candidates for the three sauces that Korê provides at every table, including ssamjan (fermented soy sauce with a twist spiciness), Kore Sauce (light soy sauce) and premium sesame oil with salt. Again, don’t forget to try the kimchi aioli with everything. Nowhere on the menu will a diner find a 40 ounce porter, the same cuts in the combination can be made in 3-4 ounce portions, reducing the amount of cuts and, therefore, the time spent on s take care of the grill. But honestly, what’s the point of an evening at Korê if not spending more time tending to the grills, sharing the common joy of eating like a team sport?

Sample Preparation: Are We Ready for a Booming Field of Intact Protein Analysis?