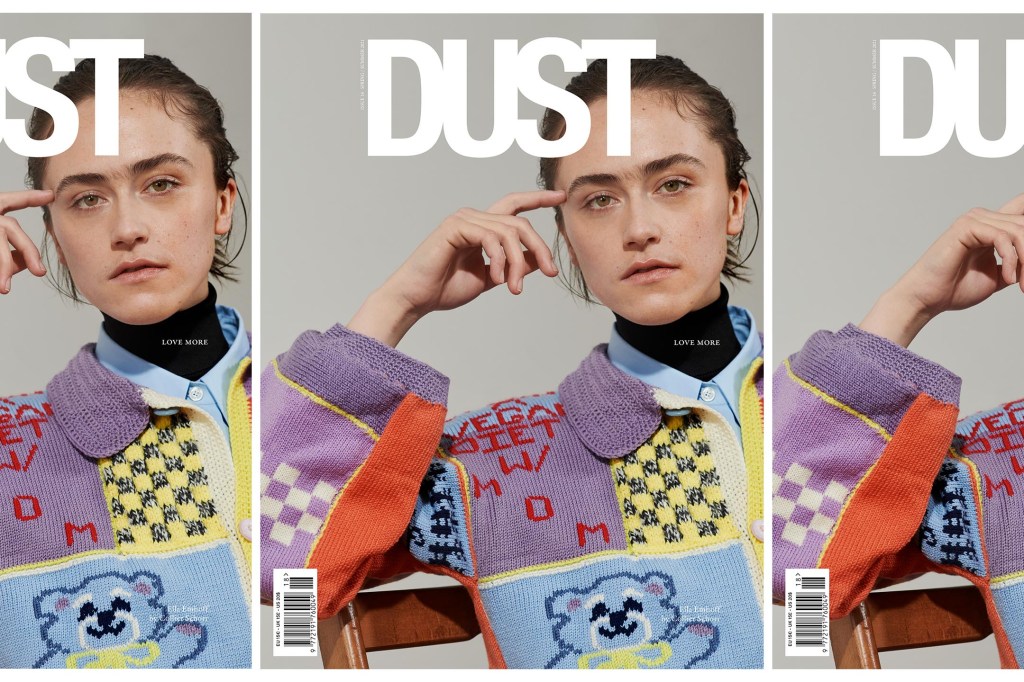 Just hours after making her New York Fashion Week debut in the Proenza Schouler Fall 2021 Show, Emhoff, the 21-year-old daughter-in-law of Vice President Kamala Harris and the daughter of second gentleman Doug Emhoff, has been revealed as one of the covers of the new issue of the Berlin-based fashion and art title Dust.

Photographed by Collier Schorr in a Brooklyn studio where she worked and styled by Brian Molloy, tTextile design student at Parsons and emerging knitwear designer poses in her own creation – a colorful patchwork knit sweater paired with a Gucci cotton shirt and sleeveless silk turtleneck from The Row.

Inside, she models a number of looks from designers like Prada, Balenciaga and Miu Miu, while Ina extensive support interview conducted by artist Marina AbramoviÄ‡ on Zoom, Emhoff discusses her inaugural outfit – a long embellished coat with cinched waist from Miu Miu worn over a Batsheva dress.

â€œThe choice was honestly very improvised. Personally, I like the cross between the old and the new. I love doily-type collars, obviously I love knits, I love tartans, I love classic embroidery, and I wanted to make sure I stay true to myself and keep that alive, â€ she declared.

She added that in general, while she likes a lot of classic designers like Gucci and Miu Miu, she mostly took inspiration from the smaller designers who have been creating their own brands in recent years. – especially throughout the pandemic. â€œA lot of small studios or singles, let’s say on Instagram, create from home; whether knitwear or with sewing machines. I think people are really pushing themselves to be creative in using materials and processes that they otherwise wouldn’t have thought of using without the pandemic. I love this London brand called Chopova Lowena.

Asked about his “master plan”, as AbramoviÄ‡ said it, Emhoff said his first the priority is to obtain a university degree.

â€œI’m in my last semester so it’s very, very close. But after college I’m obviously very excited to sign with IMG, to model and develop this creative aspect, but also to continue with my knits – that’s really important to me. It is almost a selfish act; a cathartic experience; my therapy, â€she continued. She signed with IMG Models agency last month, joining poet laureate Amanda Gorman.

As for how the collaboration came about, a representative from Dust explained that it happened very quickly. in a few phone calls after the inauguration.

â€œWe were watching the inauguration with the Dust team while we worked on the layout for issue 18 of Love More. Of all those who attended the inauguration, Ella stood out. Not only for her austere and beautiful Miu Miu coat, but also for the energy with which she was worn. It was Ella’s general style. It was so cool and refreshing, especially in this context, and surely we were impressed. It was the first time we had heard of her, â€he said.

â€œIn the days after the opening, or maybe even the next day, we were chatting with Nicola Kast, the casting director we collaborated with on some of the stories in this issue, and she brought it up. She said she knew Ella’s agent and was perfect for Dust. She just started modeling, and besides, she’s an artist. We loved the idea, and even though we were a week away from the magazine deadline, we most definitely wanted to make it happen.