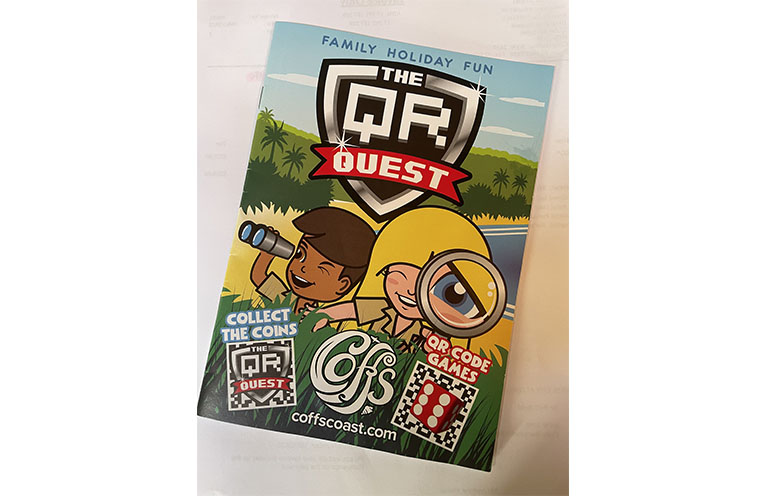 “MOM, Dad, we have to go! will become an even more familiar cry around the Coffs coast with the release of a new children’s magazine by Coffs Harbor Town Council.

QR Quest Magazine was developed by David Knight and his team, and combines print media with technology and gameplay to advertise attractions in the Coffs Harbor area.

The magazine gives kids something “fun” to do with their screen time while advertising local tourism features and businesses.

Each page of the magazine features an activity that promotes a local business, and most have QR codes that take kids to a simple online game or activity.

The actual ‘quest’ requires kids to find eight different posters at businesses on the Coffs coast and scan QR codes to collect ‘coins’ to complete the quest.

Mr. Knight is an animator and programmer who works with a group of local creatives to produce television commercials, documentaries and animated shorts.

In addition to the magazine, Mr Knight is currently working on a water safety animation featuring a family of ducks called ‘The Waddles’ for the Royal Life Saving Society.

Mr Knight said he thought about how, with everyone now using QR codes, there must be other ways to use them apart from linking to websites.

He showed some ideas to a friend who suggested he approach the Council.

“We believe this is the first holiday activity book of its kind for children.”

Mr Knight said: “The most important thing about the magazine is that it is designed to be paired with a mobile phone.

“It was conceptualized, designed and developed in Coffs Harbour.

“There’s no membership or registration, and it’s all a web application, so privacy is protected.”

QR Quest magazine is published this week and is available at tourist attractions in the Coffs Harbor area.

How a Wikipedia engineer became a vocal Web3 critic