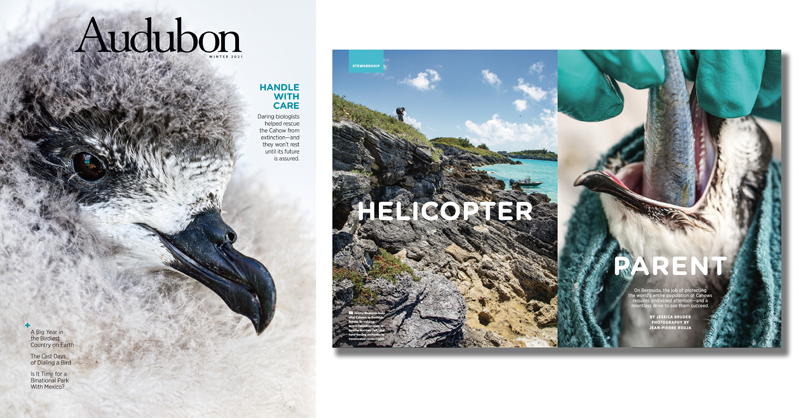 Cahow featured on the cover of American magazine Audubon

The winter edition of the US national magazine Audubon features a major article on the Cahow Project with the cover and other photographs of the founder of Nonsuch Expeditions and creator of CahowCam, Jean-Pierre Rouja.

A spokesperson said: â€œThe detailed article written by author Jessica Bruder [whose book was the inspiration for this yearâ€™s Oscar-winning Nomadland film] documents the day-to-day activities of Jeremy Madeiros and his groundbreaking Cahow transfer project, as well as the story of the original Cahow recovery program started by his predecessor David Wingate, and the dynamic between the two environmentalists.

Mr. Madeiros said, â€œIt has been an honor for the Cahow Salvage Program to be selected for this report, as National Audubon Magazine is one of the largest environmental-themed publications in the United States. With over 400,000 readers, it contributes greatly to the goal of the public outreach and education program, as do Cahow live cameras, both for Bermuda and for an international audience.

â€œI also want to thank the other staff at the Department of Environment and Natural Resources, especially Conservation Officer Peter Drew and the Terrestrial Conservation Team, led by Foreman Kiwon Furbert, who have done a lot working with the recovery strategy and been instrumental in establishing Bermuda’s One National Bird to continue its inspiring recovery.

Mr Rouja said, â€œOur CahowCams are also featured, including screenshots from the live broadcasts, and we look forward to engaging with the hundreds of thousands of Audubon members and readers as they log on. to our CahowCams just in time to witness the return of the Cahow couples to lay their only egg in early January.

â€œIt was great working with their photo editors who, in addition to asking for new images, gave me an excuse to browse through the thousands of photos taken during the now 10-year-old CahowCam project as well as the Weekly update videos I produce throughout each nesting season.

â€œHaving one of my photos used for the cover was already amazing, but the fact that the subject they chose was Poppy, our 2021 CahowCam 2 star, made it all the more iconic.

â€œHer parents were both transferred to the Nonsuch translocation A colony and then fled in 2005. They first returned in 2009 and produced their first egg in 2010; since then they have produced only one egg each year for 12 years. Of these, they managed to steal 10 chicks, making them one of the most successful pairs in the colony.

“When I provided the above caption to Audubon, they said it was the most detailed they had ever seen, but it further underscored the level of detail Jeremy recorded for pretty much all of the members of the species. “

The spokesperson said: “An online version of the article can be found here, where you can also become a member and receive a copy of the magazine, and the CahowCams can be watched live here.”