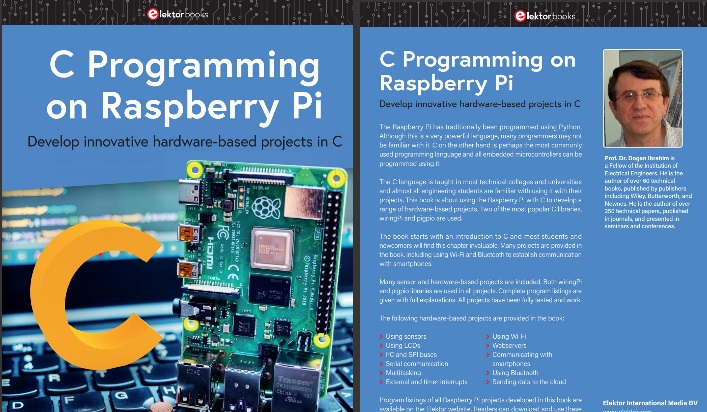 C programming on Raspberry Pi: an example chapter from Elektor

The Raspberry Pi is traditionally programmed in Python. Although Python is a very powerful language, C is probably the most commonly used among programmers. Here’s a taste of C on the Raspberry Pi.

The Raspberry Pi is traditionally programmed in Python. Although Python is a very powerful language, C is probably the most commonly used among programmers, and not just because it is taught in virtually all technical colleges and universities. This article presents a taste of C on the Raspberry Pi to help you gauge how much effort you need to put into developing your own hardware projects.

Editor’s Note: This is a sample of the delivered C programming on Raspberry Pi – Develop innovative projects based on C material (D. Ibrahim, Elektor 2021).

Communication via a Wi-Fi link takes place in the form of client and server. Sockets are used to send and receive data packets. The server-side device usually waits for a connection from clients and once it is established, two-way communication can start. Two protocols are mainly used to send and receive data packets over a Wi-Fi link: UDP and TCP. TCP is a connection-based protocol that guarantees the delivery of packets. The packets are assigned sequence numbers and the receipt of all packets is acknowledged to prevent them from arriving in the wrong order. As a result of this confirmation, TCP is generally slow but reliable because it guarantees the delivery of packets. UDP, on the other hand, is not connection-based. The packets do not have sequence numbers and therefore there is no guarantee that they will reach their destination. UDP has less overhead than TCP and, therefore, is faster. Table 1 lists some of the differences between TCP and UDP protocols.

2. Bind the socket to the server address.

3. Wait for the datagram packet to arrive from the client.

5. Send a response to the client or close the socket.

2. Send a message to the server.

3. Wait for a response from the server to be received.

5. Return to step 2 or close the socket.

Project 1: Communicate with an Android smartphone via UDP (Raspberry Pi is the server)

Goal: This project aims to show how UDP communication can be established between a Raspberry Pi and an Android smartphone.

List of programs: The program MyServer.c is shown in List 1 and can be retrieved from the software support package for the book. Head to [1], scroll to Downloads, then click Software_C programming on Raspberry Pi. Store the .zip file locally, then extract all files or just MyServer.c.

At the beginning of MyServer.c, the required header files are included in the program. The message Hello from Raspberry Pi is stored in an array of characters message. A UDP-type socket is then created by calling the socket function and storing the handle in the sock variable. The details of the server computer (Raspberry Pi) are then given where the address is set to INADDR_ANY So any other computer on the same network with the port number set to 5000 will establish communication with the Raspberry Pi. The details of the server computer are then linked to the specified port by calling the function. bind.

Many UDP apps are available for free on the Play Store. In this project the UDP terminal from couldyIT is used (see Figure 3). Enter the port number and IP address of your Android smartphone and click Start the terminal as shown on the Figure 4. An example of program execution is shown in Figure 5, where both the smartphone and the PC screen are represented.

Note: You can find the IP address of your Raspberry Pi by using the ifconfig order.

Drawn to Art – She Roars :: Article from SRQ magazine by Brittany Mattie