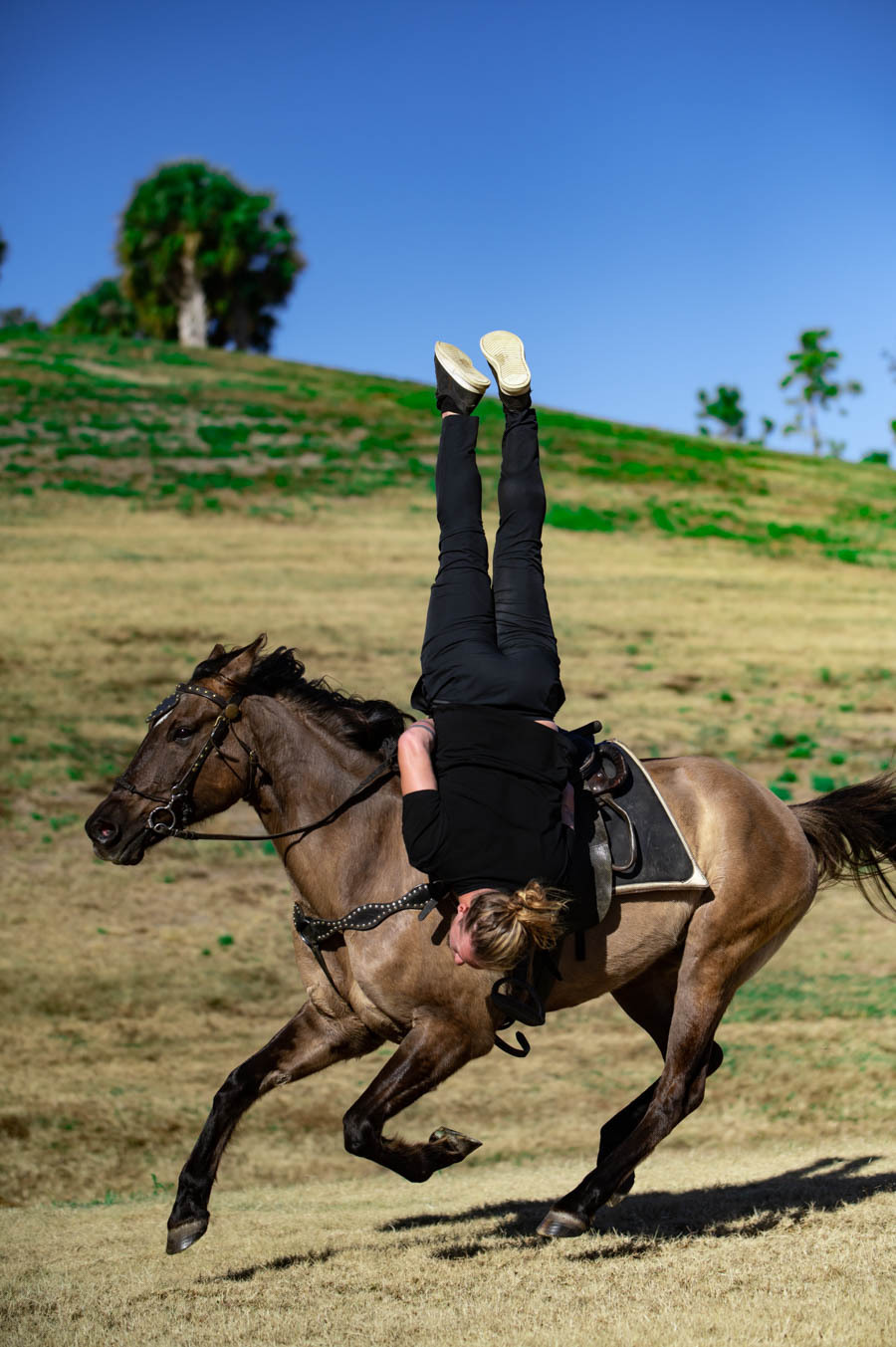 Of all the Sarasota riders, one is the only one. He is both a relic and a young man – a living, breathing piece of history, a remnant of the city’s past as a circus town. Time, however, cannot contain him, and through the vigor of his conduct he brings the past into the future. However, it takes a lot to be this bridge between eras. It takes away your childhood, your chance to live a “normal” life. It takes your body, subjecting you to years of hard falls, broken bones and bruised skin. Mostly, perhaps, it takes your mind – it requires a willingness to trick your brain into doing the impossible, over and over again. Ermes Zamperla is a 7th generation circus rider, member of one of the only families in the world to maintain this riding tradition. He has been performing since the age of six, traveling the world and sharing the oldest form of circus with everyone. Returning to a memory that still makes him laugh, Ermes recalls a show in the Montreal area when he was young with the Tarzan Zerbini circus. His role was to pose as a member of the public before rushing onto the circus ring just as his brother Gino finished his number with the ponies. “I remember going for a run in the ring and then being grabbed by this fat French-Canadian security guard. Since he didn’t speak English, someone had to tell him that I was on the show. I thought I had so many problems. Now approaching 30, Ermes has amassed a wealth of experience, including touring with the Ringling Bros. and working as a stuntman and horse trainer for AMC’s hit zombie apocalypse series, The Walking Dead.

“I love the speed, the danger and how much it takes to believe in yourself to pull off those stunts. It doesn’t matter if you’ve done it a thousand times, every show is different. Every audience is different. I can feel that fear before I go up in the ring, but as soon as the curtain opens, it all goes away. There’s just complete silence. The ability to conquer that fear, however, is what drives Ermes to put his body in danger time and time again. That doesn’t mean the adrenaline rush is free.Ermes recounts a series of shows he performed at a large bullring in Toronto, where his horse Murdock, a grulla-colored American Quarter Horse Cross who stands 15’2 hands, had the chance to acquire unusual speed while Ermes played “under the belly”. “Because the arena was so big, Murdock could really reach with his legs and build up more speed than usual. At the end of each show, my sides were black and blue because he was reaching and kicking me. with the back of his legs. That’s why I would say that I didn’t perform in seven shows, I “survived” seven shows.

For Ermes, whose stable includes the now 16-year-old Murdock and a trio of other horses, the degree of trust between horse and rider needed to perform death-defying stunts in front of a sold-out arena far exceeds the parameters of the typical horse-owner relationship. It’s more like the bond between fighter pilot and co-pilot or rally car driver and navigator – a partnership forged in danger in the pursuit of glory. Their partnership is indicative of the special relationship many actors in the circus and performing arts community have with their animals. By cultivating an understanding of her connection to Murdock, Ermes hopes to dispel the negative connotations the outside world often has of people who work with animals. “We will communicate through a look he gives me before throwing a trick. If I fall, it stops. If I’m in bad weather, he takes care of me. I’ve been through so much with Murdock, from taking him around the world to performing in front of hundreds of people, that our relationship is indescribable. We have incredible trust in each other and a level of connection that most people can’t fathom. said Ermes. For Ermes and Murdock, however, this bond was not built overnight. “I don’t think he had had very good experiences before he was in my hands – sometimes I wasn’t sure if I would get Dr Jekyll or Mr Hyde,” Ermes says. “It took us a while to trust each other, but he kept trying for me. It took three years, but eventually he became my best horse.

When not on tour, Ermes helps others train and work with problem horses. A horse, a wild California Mustang, which had landed two people at the hospital, left a special mark on him. “After a few weeks I thought I had made really good progress, but when I galloped him past his owner, he pushed my back. A week later his owner called me and told me that her husband had been injured on the job and they couldn’t afford to keep him anymore – I was faced with the choice of taking the horse or see him go to the pound.

Unable to live with this blood on his hands, Ermes adopted the horse and named it Agi – short for Agrios which means “savage” in Greek. Because Ermes’ stable is so talented, he was able to take his time training Agi. After two years, Agi became disciplined enough to perform in shows with Ermes. However, Agi was never destined for a life in the circus and was gifted to Ermes’ girlfriend, Amanda, who gives Agi a future as a jumping horse.

“I see so many kids quit when they get into awkward positions with a horse. I told Ellian I just wanted to help these kids gain confidence and not be such a victim of their own journey. The goal of the clinic has never been to create the best trick rider in the world – that, as seen in Ermes, takes a lifetime of lessons. “I want children to understand how to be the aggressor and not the victim when they find themselves in an awkward position. How not to give up when your horse is in trouble or afraid of something. How not to panic in the face of a tricky situation. Circus bareback and stunts are all about having tremendous determination and confidence. By learning this, I hoped to instill those same values ​​in these young riders.

For all the work Ermes takes – the time on the road, his chance to have a normal childhood, and the wear and tear on his body – it gives him more in return. It gives him peace. It gives him a purpose. More importantly, it gives him a path, different from the rest of the world, paving the way for anyone who dares to follow him.