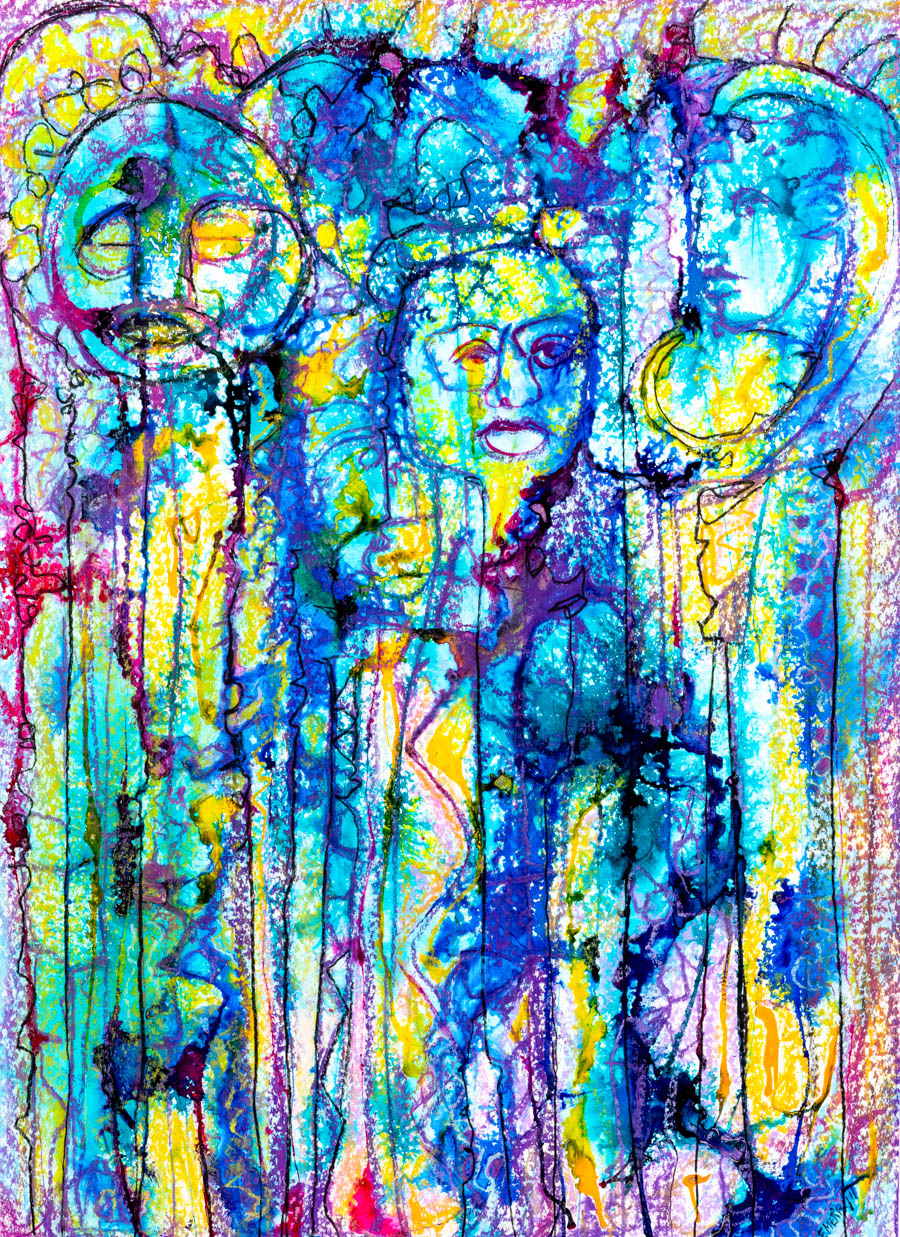 A day at the Ringling

Dr. Lisa Merritt remembers talking with her mother about “Someday. . .” This was before matriarch Merritt passed away in 2019, but after being diagnosed with lung cancer a dozen years before, Eleanor Merritt was still painting, through pain and through terrible knowing that her story would end in some way. She had come to accept that her escape as an artist probably wouldn’t happen in this lifetime, so she and her daughter would talk about that mythical “someday” instead, when the rest of the world understood what those two there already knew. in their hearts to be true – that Eleanor Merritt was a master artist. “I promised him we would have an exhibition,” Lisa says today. And with Remembrance, currently on display at the Ringling Museum, it fulfills that promise. It was not easy.

An artist’s legacy can be difficult to parse, and there’s a reason why some people make a profession of it. In the case of Eleanor Merritt, her legacy spans almost seven decades of unrelenting activity. From his time as a rising star at the High School for Music and Art and Brooklyn College to his years on the Suncoast, Merritt never seemed to stop moving and building. She taught art for 27 years on Long Island, became the first African American chair of the district’s art department, and was an early member of the Long Island Black Artist Association and co-founded Women of Color. of Art. She traveled the world in search of inspiration and brought it back to Sarasota, where she served on the Board of Trustees of the Arts Council and the Ringling Museum, served as President of the Venice Art Center, and became a Florida Fellow. Artists Group, Women Contemporary Painters and petticoat painters. She has been an educator, community leader, administrator and even volunteer guide for 25 years. And for nearly 70 years, she never stopped painting.

Much of the work Lisa could remember in one form or another. She grew up helping her mother hang shows and remembers carrying paintings around town for delivery or display. At times she even sat down for her mother’s paintings, absorbed in her creative process, and will still refer to some of these early works as her “siblings”. Imagine her surprise to find a whole bunch of siblings she didn’t know she had, when the initial account of Merritt’s workshop unearthed a substantial body of additional work that no one had. never seen. “It just made me love him even more, if that was even possible,” Lisa says. Stored in unassuming shelves like so many loose materials and scrap resources, entire studies were strewn about, iterations and variations on a theme showing an artist in full exploration. Fortunately for his discoverers, Merritt also took meticulous notes. “She was extremely fastidious in documenting her work,” Lisa says, and that included not only organizing the drawings and paintings themselves, but also keeping track of her sales and correspondence with collectors, writing of notes on the stories behind the individual pieces and ensuring that the medium and its message were never easily separated. “She was self-organizing,” Lisa says. “It allows you to better grasp the range of who she was.”

But capturing the entirety of his mother’s legacy has always proven elusive. Enter Mike Solomon, a celebrated artist with over 30 years of experience navigating and appraising artist estates, including that of his father, Syd Solomon. “People close to artists always think they’re great,” Solomon says, and it’s his job to determine if they’re right. When digging through an artist’s estate, Solomon not only catalogs what can be found in the studio or in the galleries, but searches for as much of their work as he can find, wherever it is. In collections, on magazine covers, in occasional exhibitions and strange forgotten corners where only a useful signature on the canvas recalls the hand that made it. He wants it all. And through the entirety of his assessment, he holds one question at the forefront: does the work transcend personal history? “You have to,” Solomon said. In his initial investigation, Solomon found about 200 different works of art in Merritt’s name – and only about half of them Merritt’s estate controlled or even knew where they were. “It’s four or five times more than now,” Solomon says, as two more years of investigation continued to uncover more and more of the unwilling artist to give up. But Solomon had already seen enough. “I was f*[email protected] blown away,” he says. “He was a serious performer with serious chops.”

Examining the work, Solomon quickly identified at least three to four major styles or modes that Merritt adopted, and for each of these he found 30 to 50 paintings depicting the artist’s engagement with each idea. “She explored them all very thoroughly,” he says. “And a show could be done on each of his styles.” He identified clear guidelines in her career – themes and areas of interest that she used her painting to investigate and discover. Some were topical, such as exploring the power of the human form, the necessity of humanitarianism, and the role of women, especially women of color, in history and society. Others were material, as evidenced by Merritt’s continued experimentation with new mediums, ranging from oil to acrylic to colored pencil to mixed media, working on canvas, cardboard, paper and even hardwood. tapa cloth from Jamaica.

Even Merritt’s early work, in high school and college, showed the artist she would become. “Some people have natural talent, but they navigate it,” Solomon says. “He was someone who took that talent and worked really hard, was very disciplined and pushed it as far as he could.” In the end, he would come to only one conclusion: “Eleanor was a master,” Solomon said. “In every way, she is more than qualified.”

The next stop was the Ringling Museum. Over the course of her career, Merritt has exhibited throughout New York and Connecticut, from the Black History Museum and the Langston Hughes Cultural Center to the University of Connecticut and the Craftery Guild. In Sarasota, her work has been seen in exhibitions at the Art Uptown Gallery, Art Center Sarasota and more. Sarasota’s Arts & Cultural Alliance even held a retrospective in 2016, titled Sixty Years of Painting: 1957-2017. And she was no stranger to the Ringling Museum, having served on the board and been a popular guide for more than 25 years. But an exhibition was something else.

Lisa went to the Ringling in place of her mother, to champion her mother’s legacy and provide a solo show. Solomon accompanied. They met Executive Director Steven High, who knew Eleanor Merritt from her contributions to the museum, and Solomon told him the museum had an opportunity ahead of it – to “discover” a serious artist, right in its backyard, awaiting for a long time for recognition. High said he would organize the exhibition himself. On view at the Ringling through August, Remembrance offers viewers an abbreviated journey through Merritt’s prolific career, using 22 paintings to highlight important styles, themes and works.

“A show could be done on each of his styles,” says Solomon, who did the initial curation with Lisa, before handing the project over to High. The first piece, Untitled, dates from 1950, when Merritt was still in school and only 17 years old, showcasing the talent that stood out so much. And paintings like Metamorphosis aka Transformation, Corn Goddess and Remembrance highlight the artist’s singular blend of abstraction and figurative work, something Solomon was sure to include. “It’s a particular genre that’s just fascinating,” he says. “And I wanted several.” He was equally adamant about the inclusion of Merritt’s Spirit Catcher and Mourning, Soweto Series, both of which were done with conte crayon and exhibit an aesthetic that is both decidedly Merritt yet distinct from his other works. “It’s an area of ​​work that really needs to be looked at,” says Solomon. “She was an incredible designer and these show it best.”

Other paintings have more personal stories that only a girl would know. Lori Merritt remembers when her mother made Angel of Mercy 911 in 2001, acrylic on tapa canvas. “It brought her to her heart,” she says. And Lisa will always remember the self-portrait her mother painted in 2007, following her cancer diagnosis, the fierce and provocative image like flame. “It showed its power,” she says. “That his life force was strong.” And she will remember Just Breathe, painted in 2014, when the diagnosis worsened. “She painted like there was no tomorrow,” Lisa says, and that kept her going. “There is no doubt.”

Painted in 2018, Blue Embrace is Merritt’s latest work to be found in the exhibition, a fitting blend of figurative and abstract, warm despite a blue that might otherwise be cold, and one of the last marks of a master. After the exhibition ends in August, three of the paintings will remain with The Ringling as part of the museum’s permanent collection. And the museum also launched the Eleanor Merritt Fellowship in her honor, an annual scholarship program for recent university graduates from underrepresented populations in arts administration, who have an interest in the arts of conservation or administration. Arts. From there, there are tentative plans for future exhibits, traveling shows, maybe even a book. “This exhibit is just the tip of the iceberg,” says Solomon. “And the iceberg is huge.”

But for the Merritt sisters, remembrance will always hold a special place. “It’s an affirmation of 60 years of art,” says Lori. “This is an opportunity to breathe new life into his works.” And weeks after the opening reception in Ringling Court, Lisa still fondly thinks back to that moment, in front of a crowd gathered to celebrate her mother’s art, which was just outside the door of the gallery. “It was an incredibly fulfilling time,” she says. “I felt his spirit with me. “It’s good.”